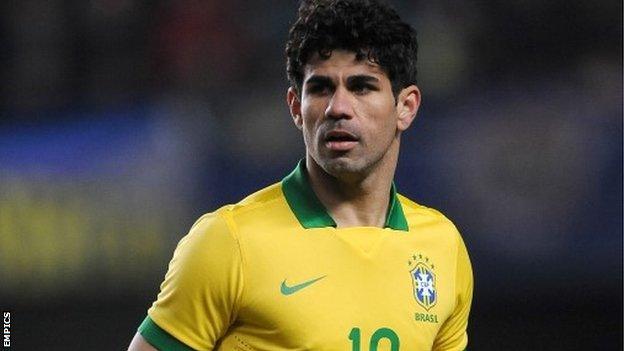 Spain have called up striker Diego Costa for the first time after he rejected his home country Brazil.

Costa, 25, and could make his debut against Equatorial Guinea or South Africa.

Coach Vicente del Bosque said: "He has fulfilled all the requirements to play for Spain and he is in very good form.

"Surely Costa cannot have the same depth of connection with Spain that he has with Brazil. So why the temptation to trade the yellow shirt for a red one?"

"The last step in the process was to get to know him personally and he left us with a magnificent impression."

Atletico Madrid striker Costa has scored 13 goals in 12 La Liga appearances this season, and played for Brazil in friendlies against Russia and Italy in March.

But he was left out of the squad for June's Confederations Cup and is not tied to one country until he has played in an official competitive game.

"I have absolutely no doubt he will be a squad member like any other," Del Bosque added.

"I expect that a player that fights like Diego with such energy, a player with the quality he has on and off the ball, to be a positive addition."

for the upcoming friendlies with Chile and Honduras.

Scolari added that "Spain should respect Brazil's right to choose its players" and accused Costa of "turning his back on the dream of millions".

Speaking last week, Costa admitted the decision to switch allegiance was a difficult one.

"It was very difficult to choose between the country where you were born and the country that has given you everything," he said.

"I looked at everything and saw that it was right and best to play for Spain because this is where I have done everything. All that I have in my life was given to me by this country."

Costa is the fifth Brazil-born player to be included in a Spain squad following Heraldo Becerra, Catanha, Donato and most recently Marcos Senna.

Holders Spain will defend their World Cup title in Brazil next summer.