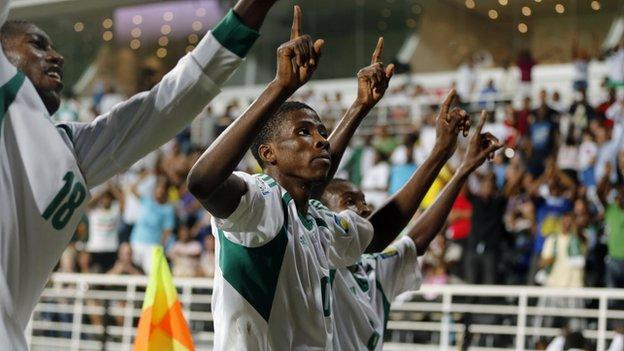 Nigeria won the Under-17 World Cup for a record fourth time on Friday with a 3-0 win over champions Mexico.

Erick Aguirre's own goal put the Golden Eaglets in front in Abu Dhabi.

The Nigerians doubled their lead with a tap in from Kelechi Iheanacho before captain Musa Mohamed's free kick sealed the win.

Nigeria also picked up the tournament's fair-play award and Dele Alampasu was awarded the Golden Glove for being the best goalkeeper.

The first goal came after nine minutes from a Nigerian counter-attack moments after the Mexicans had threatened at the other end.

The Golden Eaglets broke quickly to create a three-against-one situation, and as Musa Yahaya was about to pull the trigger, Aguirre's attempted clearance ended up in his own net.

Yahaya nearly doubled the lead in the 39th minute but his shot crashed against the bar.

Moments later, Taiwo Awoniyi tried a spectacular overhead kick but it went straight into the arms Raul Gudino in the Mexican goal.

Nigeria record at U17 World Cup

Mexico threatened the Nigerian goal a couple of times in the first half but found Alampasu in inspired form.

The Mexicans pressed early in the second half but it was Nigeria who doubled their lead when Gudino parried a long range shot into the path of Kelechi Iheanacho, who tapped in for his sixth goal of the tournament.

With 15 minutes left on the clock, the Mexicans had a great chance to score but Ivan Ochoa headed wide.

The title was sealed when captain Mohamed curled a free kick round the wall from the edge of the area with nine minutes left.

The victory in the United Arab Emirates caps a successful year for Nigeria after the senior team won the Africa Cup of Nations in South Africa in January.