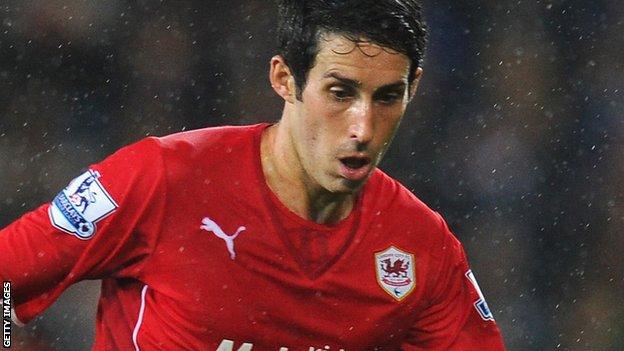 Midfielder Peter Whittingham insists he has no regrets about leaving Aston Villa for Cardiff City six years ago.

Whittingham, 29, came through the ranks at Villa and made 56 Premier League appearances for club.

Cardiff's visit on Saturday will be Whittingham's first league game at Villa Park since his 2007 departure.

"I felt like it was the correct decision. I've had some great years at Cardiff and long may they continue," he said.

"I wasn't playing at the time and I was getting to that stage in my career where I wanted to be playing regular football.

"There's nothing worse as a footballer when you train all week and you're not involved on the Saturday.

"They [Villa] played a massive part in my career and made me the player I am today."

The Nuneaton-born midfielder left Premier League Villa for Championship side Cardiff in January 2007 in a £350,000 deal.

Whittingham was in the Bluebirds line-up which lost at Villa Park in a Carling Cup third round tie in 2009.

But the former England Under-21 international has had to wait six years for the chance to face his former club in English football's top-flight.

"It's going to be a great occasion and a match from which we can earn three points," Whittingham added.

"Villa have a lot of young players and it will take time. They will make mistakes, but their manager [Paul Lambert] knows what he is doing.

"He will nurture them and Villa will be okay in the long run.

"It's a massive club with a great history. But our job is to do all we can to win and that's what I am focused on."