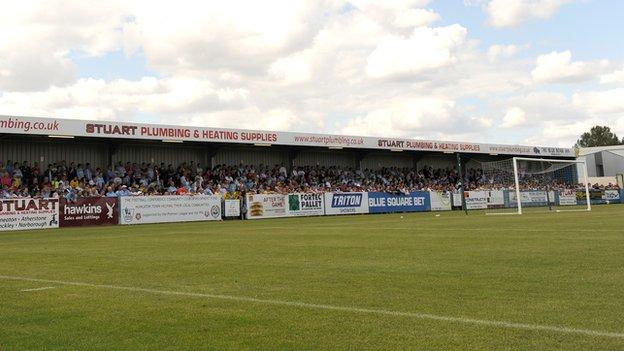 Subject to international clearance, the 21-year-old, who has been on the books of Nice, Fulham and Dutch top flight RKC Waalwijk, will be in the squad for Tuesday's game against Forest Green.

Boro have also signed young 6ft 4in Dutch keeper Kelle Roos, who started this season on trial at Bristol City.

Roos, 21, also needs his paperwork to be ratified before being cleared to make his Boro debut.

This is the end result of an intention the club has had for a while, to widen our recruitment net and see whether we could attract something a little bit different

He will replace Dimitar Evtimov, who has returned to Nottingham Forest after his loan period came to an end.

Boro have also lost teenage defender Michael Richens, 18, who has been recalled by Peterborough United after making four second-half substitute appearances since arriving from London Road in mid-September.

"Richard has been unfortunate with injuries, but his pedigree is impressive," said boss Kevin Wilkin.

"We have the chance to get him fit and, whilst it won't happen overnight, he could prove an exciting player for us.

"As for Kelle, he had a number of options in both the Netherlands and England, so it is a credit to him and the club that we have been able to bring him here

"This is the end result of an intention the club has had for a while, to widen our recruitment net and see whether - for the limited budget we have - we could attract something a little bit different."

Early season pacesetters Boro have slipped to 10th in the Conference Premier after a run of eight league games without a win.