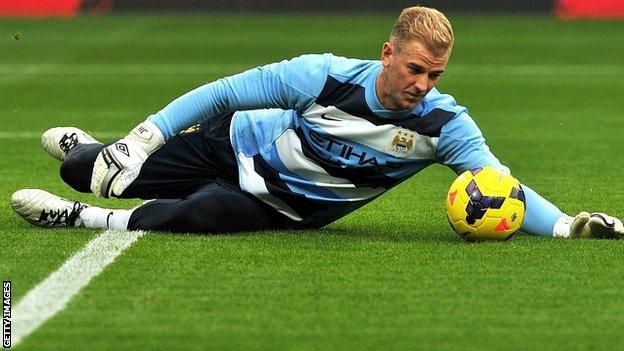 England goalkeeper Joe Hart is a "unique" talent who should not have been dropped by Manchester City, according to Peter Schmeichel.

Hart has lost his place to Costel Pantilimon after a string of high-profile mistakes for City.

But Schmeichel, who played for both Manchester clubs, told BBC 5 live: "I don't think he's done too much wrong.

"Sometimes things aren't working for you, but when it's Joe Hart it's highlighted like he's killed someone."

Manager Manuel Pellegrini made the decision to drop Hart after a misunderstanding between the 26-year-old goalkeeper and defender Matija Nastasic allowed Fernando Torres to score the winner in Chelsea's 2-1 victory over City at Stamford Bridge.

Pantilimon was preferred for the 7-0 home victory over Norwich last Saturday and kept his place for the 5-2 Champions League win over CSKA Moscow in midweek.

Former Denmark international goalkeeper Schmeichel, who won five Premier League titles with Manchester United between 1992 and 1999, thinks Hart's errors have been blown out of all proportion.

"He might have had the odd situation, but he hasn't gone from being an absolutely brilliant keeper to what he is being portrayed as now.

The problem Joe has now is that if Pantilimon doesn't make a mistake, Pellegrini is not going to be able to drop him

"Why is it that when you finally have an English goalkeeper who has the quality to become the first part of the spine that can actually take England somewhere, everyone wants to drag this kid down?

"You have a unique goalkeeper here, someone who is very, very good even on his bad days.

"When you look at the goals he has been criticised for, at some point they could have been prevented by a defender or it was a misunderstanding.

"It is not down to Joe Hart on his own. Manchester City have got problems at the back."

Hart, who was at fault for goals in defeats at Cardiff and Aston Villa in the Premier League and at home to Bayern Munich in the Champions League, has so far retained his position as England's number one and received the support of manager Roy Hodgson.

But according to Aston Villa keeper Shay Given, who lost his place at Manchester City to Hart, the situation is a worry for both the player and the national team.

"The problem Joe has now is that if Pantilimon doesn't make a mistake, Pellegrini is not going to be able to drop him," Given told 5 live.

"That would be a big problem for Joe. It's a World Cup year, Brazil is not that far away and Joe will want to be playing every week. Roy Hodgson will also want to see him regularly."

Meanwhile, Schmeichel has criticised Ashley Young for diving to win penalties and suggested the tactic could turn out to be counter-productive.

The United forward, who was spoken to by former United boss Sir Alex Ferguson last year for going to ground too easily, won a controversial penalty against Real Sociedad on Tuesday.

"Referees read newspapers and see TV so they are going to be very, very cautious. They don't want to give away a penalty which is a dive.

"You try to be honest as a player. You don't want to win by cheating. Ashley is that good or potentially that good, so why does he have to dive? Take someone on and try to score with your skill."