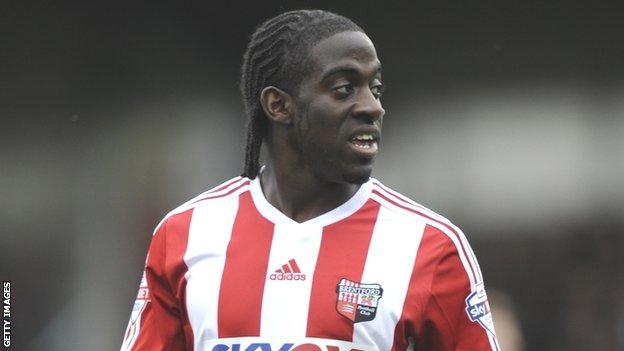 Marcello Trotta headed the opener from 18 yards out just before the break.

Adam Forshaw then danced through straight after the restart, finishing neatly before Chelsea loanee George Saville curled in a classy third.

Donaldson beat the offside trap to tap in number four from close range, the ex-Crewe striker then firing the fifth after a slick, six-man passing move,

Brad Inman had the visitors' only real glimpse of goal but sliced his effort wide when set up by Byron Moore.

Victory keeps the Bees in fourth, while Crewe remain third from bottom.

"They played with a false number nine, which was unusual in our league. We dominated the first half then we figured out their plan and improved quickly in an impressive way in the second half.

"Marcello is in great shape and works hard off the ball and we are very happy to have him and all my players.

"We had good communication with Northern Ireland regarding Will Grigg, but he didn't play last night in Turkey and he came back today and let out his frustration in a good performance and his drive was very good.

"Our next games against Wolves and Peterborough are tough but we can beat them."

"We went to Preston when they were flying and won there so we know they can do it. It's a question of having the belief.

"We had stifled them for 44 minutes and were doing fine, having restricted them to a couple of half chances and the game plan looked to be working.

"But their first goal came at a bad time for us. I don't know how it's gone in from that distance, although it was a very good header. And then we conceded seconds into the second half."