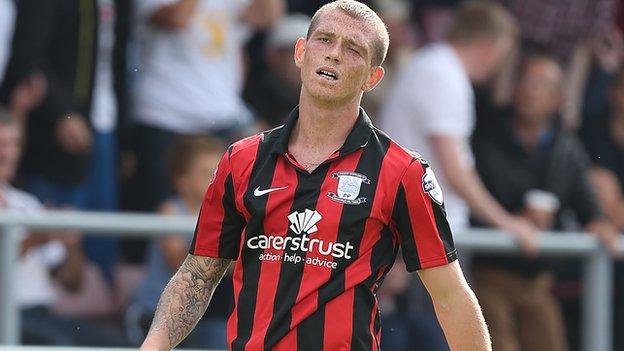 Leyton Orient fell to only their second league defeat of the season as Joe Garner's goal gave Preston victory to knock the hosts off top spot.

The visitors took the lead when Garner struck a wonderful first-time volley beyond keeper Jamie Jones from Keith Keane's cross.

Garner in the goals

The former Carlisle and Watford striker failed to score in his first 17 Preston games but has now struck four goals in his last three games.

Robbie Simpson forced Declan Rudd into a late save as Preston held on.

Russell Slade's side had scored in all their previous 15 league games and are the Football League's top scorers with 36 but drop to second after Wolves won at struggling Notts County.

Despite becoming the first team to take all three points away from Brisbane Road since February, Preston drop down a place to fifth after Brentford's big win over Crewe.

"It was a tight game. Preston bossed it and made life tough for us in the first half by slowing the game down and dictating the tempo.

"They didn't create a lot either. It was cagey and we grew into it and had a wonderful window of opportunity to equalise late on.

"[Suspended midfielder] Romain Vincelot is the heartbeat of the team and he was missed today.

"We knew today would be tough as they set their stall out and were pretty negative. We are disappointed but are still up there and have the chance for a fine season."