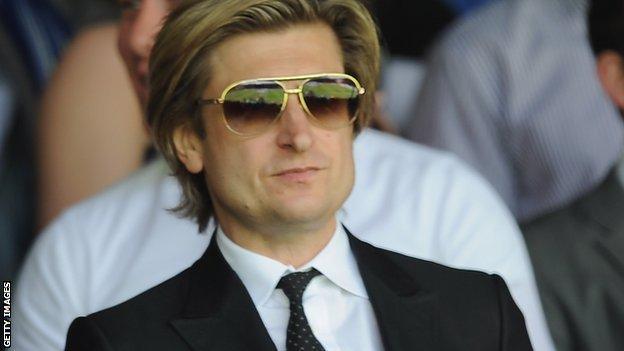 Moody left his position as Cardiff's head of recruitment after being suspended on 9 October and replaced by 23-year-old Kazakh Alisher Apsalyamov.

He will help select a new Palace boss, with an appointment possible before the match at Hull on 23 November.

"We're very happy with Iain Moody. I met him and was very impressed with him," Parish told BBC's Football Focus.

"Player recruitment is essential at a football club. He'll work directly with me and the new manager when he's appointed.

"Iain is someone whose opinion we'll ask about getting the new manager.

"We want to appoint someone quickly but we must get the right person. We want someone who will take this club forward over the next three-to-five years.

"We're down to three or four possibilities, and we would hope to get something in place for Tuesday and Wednesday next week, though it might go on a little longer."

Former Eagles defender Chris Coleman has been linked with succeeding Ian Holloway as manager at the Premier League's bottom club, but he is thought to be in talks about extending his contract as Wales manager.

Moody will attend Palace's match against Everton at Selhurst Park on Saturday.

"I am very excited by the opportunity I have been offered and would like to thank the club for their faith in me," Moody told Palace's website.

"The club has made impressive progress since 2010 and I look forward to playing my part in helping ensure their continued success. I can't wait to get started."