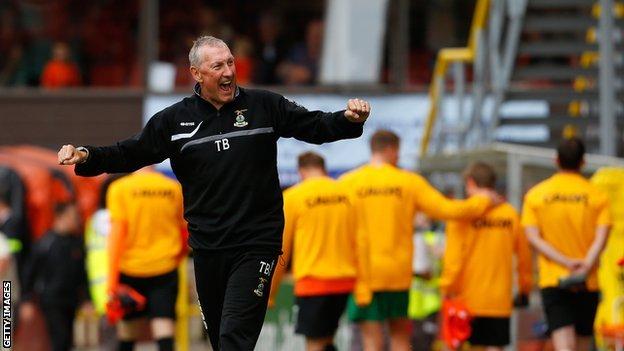 Terry Butcher is expected to complete a switch from Inverness Caledonian Thistle to Hibernian after the two sides meet on Saturday.

It is understood that completion of the Englishman's switch to Easter Road has been delayed because compensation has yet to be agreed between the clubs.

Butcher is not expected to be in either dugout in Edinburgh.

Given permission to speak to Hibs on Tuesday, he is thought to have said his farewells in Inverness on Friday.

There's a structure in place to really progress the club

Neither club nor Butcher have commented publicly in recent days about Hibs' interest.

But youth coach Duncan Shearer took training 24 hours after Butcher's assistant, Maurice Malpas, had stated he was fully focused on preparing the team for the Easter Road game.

Hibs stated on Tuesday that caretaker boss Jimmy Nicholl had been told he would take the team again on Saturday after stepping in for the 1-0 defeat by Motherwell on Sunday following Pat Fenlon's resignation.

Hibs held their weekly media conference as planned on Friday afternoon, but Nicholl, who played with Butcher at Rangers and had the former Motherwell boss on his backroom staff when he was manager of Raith Rovers, decided against attending.

Former England captain Butcher turned down a move to Barnsley in January before leading Caley Thistle to their highest league placing of fourth last season.

Butcher took the team up from the First Division at the first time of asking in 2010 after failing to prevent them going down after becoming manager in January 2009.

They go into the game at Easter Road in third place in the table, four places above Hibs, after leading the way for the first two months of the campaign.

"He has done a great job," he said. "We don't have the greatest record against them, especially up there. It's always a tough game.

"They are up there in the league for a reason. I don't think they get the credit for the football they play - they play good football."

"There's a structure in place to really progress the club," he said.

"Pat Fenlon spent a lot of time and effort reorganising a lot of things behind the scenes that maybe you guys don't see.

"He really changed the academy and progressed that; the scouting system, the infrastructure at the training ground has all been progressed.

"There was a big turnover of players in the summer and it's taken a bit of time to gel, so whoever comes in it's really a case of trying to get the balance and squeeze a bit more out of the players. Everything else is in place."