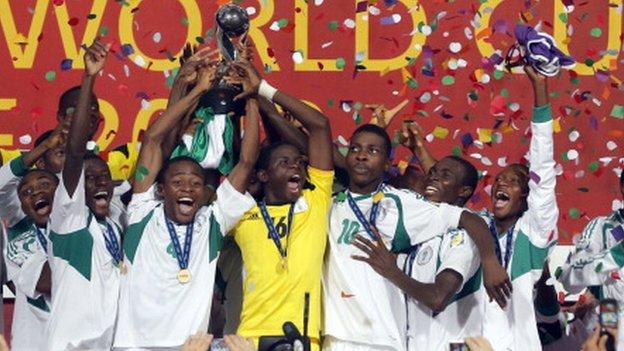 Nigeria coach Manu Garba said he was happy to give the country's president a trophy to celebrate after his team beat Mexico 3-0 in the Under-17 World Cup final.

The Golden Eaglets won the trophy for a record fourth time on Friday and their fourth on Asian soil after previous success in China 1985, Japan 1993 and South Korea 2007.

Away from the battery of cameras and in the hallowed corridors of Al Jazira's dressing room in Abu Dhabi, Manu said President Jonathan more than anybody deserved praise for the feat he achieved with his team.

"This trophy is for President Goodluck Jonathan, who had a strong belief in us despite the fact that we came second at the African championship," Manu said.

"We were really fired up when he hosted us after the African Championship and we are looking forward to meeting Mr. President again with the World Cup."

Manu Garba was the assistant coach when the team won their third U17 title in South Korea in 2007.

He described President Jonathan as a very lucky man after the Golden Eaglets followed the footsteps of the Super Eagles by winning a major trophy in 2013.

"This is a great year for our country and football-loving president," he added.

The senior national team started the year with glorious outing at the Nations Cup in South Africa and the Golden Eaglets World Cup win is more than an icing on the cake as 2013 comes to an end.

Meanwhile, attacking midfielder Kelechi Iheanacho emerged as the competition's outstanding player as he was was voted the Most Valuable Player.

Iheanacho scored six goals that secured him the Silver Boot as the competition's second-highest goalscorer.

Nigeria also picked up the tournament's fair-play award and Dele Alampasu was awarded the Golden Glove for being the best goalkeeper.