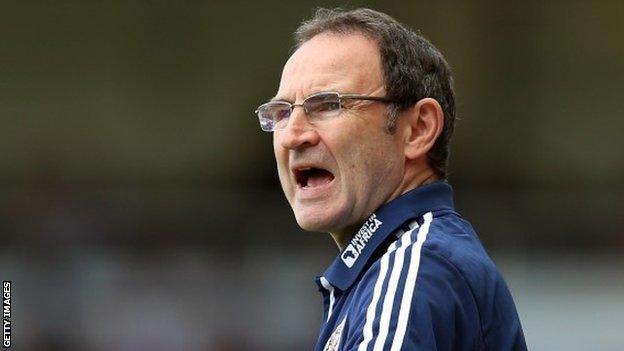 Martin O'Neill believes he should not have been sacked and replaced by Paolo Di Canio at Sunderland last season.

The 61-year-old was dismissed by the Black Cats last season when the club were one point above the relegation zone with seven games remaining.

"I was very, very disappointed - I thought my record in the game suggested we would have accrued five points from seven to keep us in league," he said.

Di Canio kept Sunderland in the league but was sacked in September.

The 45-year-old Italian won three of his 13 matches during his tenure and took only one point from five league games this campaign.

Di Canio had criticised O'Neill soon after taking charge of the north-east outfit, questioning how the club had lost to Championship sides Middlesbrough, in the Capital One Cup, and Bolton, in the FA Cup.

"The owner chose a manager for 13 games who just about criticised everything we did beforehand and is not actually in work at the moment," the new Republic of Ireland manager added.

Sunderland are 19th in the Premier League and have four points from 10 games. They host Manchester City on Sunday.