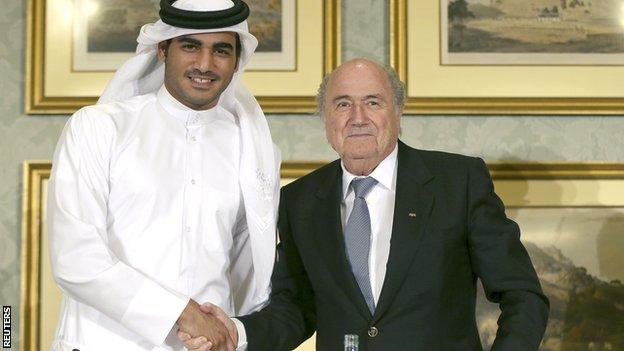 The Qatar World Cup will not be moved to January or February 2022 because of the Winter Olympics, according to Fifa president Sepp Blatter.

He said the tournament would instead be held in November or December that year.

Fifa wants to move the competition over fears Qatar's 40C summer temperatures will put players and fans at risk.

"It is logical to play this competition at the end of the year. We cannot have two competitions at the same time," said Blatter.

Last month Fifa set up a taskforce to look at alternative dates for the tournament through a consultation with medical experts, broadcasters, sponsors and influential European leagues.

"It will be November-December," said Blatter. "I don't know exactly the dates, but it could be from 10th to 10th whatever.

"In January and February, these are the Olympic Winter Games.

"It is out of the respect to the Olympic organisation - the Olympic family. Secondly, we have practically the same media, television and marketing partners."

Blatter, who was speaking after meeting the Emir of Qatar, Sheikh Tamim bin Hamad al-Thani, also ruled out any possibility that the Gulf state could co-host the 2022 World Cup with neighbouring countries.

There have been calls from a number of senior figures, including Football Association chairman Greg Dyke, for Fifa to consider awarding the tournament to another nation.

Qatar has a hot desert climate with daytime temperatures usually peaking at 42C during June and July. It doesn't tend to get much cooler overnight as temperatures typically don't fall below 30C.

The climate during November and December is similar to that of a European summer, when the average daytime temperature is around 26C with the chance of a little rain at times.

Premier League chief executive Richard Scudamore insisted the tournament should go ahead in the summer, although Europe's leading clubs have said they are "open" to the possibility of a winter World Cup.

However, Qatar's suitability to host the event has also been questioned after criticism over its treatment of migrant workers being employed to deliver the World Cup.

"They are aware of the problem but they are already reacting to that," added Blatter. "The labour laws are in the process of being amended."

However, he did not give further details of the proposed amendments.

Qatar, who defeated rival bids from South Korea, Japan, Australia and the United States, was awarded the tournament in December 2010.