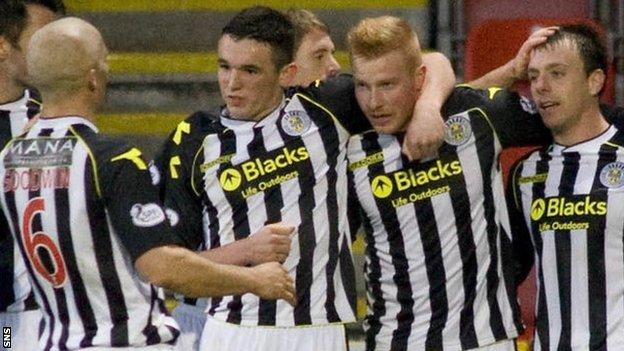 Danny Lennon was delighted with the counter-attacking style that brought St Mirren success at Partick Thistle.

"I thought the players thoroughly deserved maximum points in terms of what they brought to the game with their shape and discipline," the Buddies manager said after the 3-0 win.

"Partick caused us a lot of problems first-time around and a lot of thought went into today's game plan.

"We turned their strengths to our advantage very well."

The longer the campaign goes on, more teams get to know your strengths and weaknesses

Steven Thompson headed the visitors into an early lead and allowed Lennon's men to sit back and protect their advantage.

And, when Thistle lost Stephen O'Donnell to a red card after 69 minutes, St Mirren eased to a third win in four games through a Conor Newton strike and a second goal from Thompson.

"I must take my hat off to Partick Thistle, because I love the way they stick to their philosophy and try to play the game in the right manner," added Lennon, a former Firhill captain.

"But you can't go out and bake the same cake every week.

"The longer the campaign goes on, more teams get to know your strengths and weaknesses.

"And, second or third-time round, opponents will give you that respect you deserve, but will also know so much more."

St Mirren, who started with five academy graduates, were fortunate not to concede a penalty shortly before Newton's strike.

A long-range shot from Kallum Higginbotham was blocked by the hand of Buddies skipper Jim Goodwin, but referee John Beaton waved play on.

"That was miles away from me," said Lennon. "But the 4,000 fans in the Jackie Husband seemed to think it was a penalty.

"We rode a wee bit of luck there. It was maybe a wee break, but I think we thoroughly deserved the win.

"That will lift the players and give them a little bit of confidence. It's a just reward for their efforts.

"We know where we want to be; we want to be in that exciting half of the table, where this club hasn't been for 30 years.

"And we know we have to do that step by step and game by game.

"Our next focus is the Ross County game on Sunday and that presents us with an opportunity to progress a little bit further."