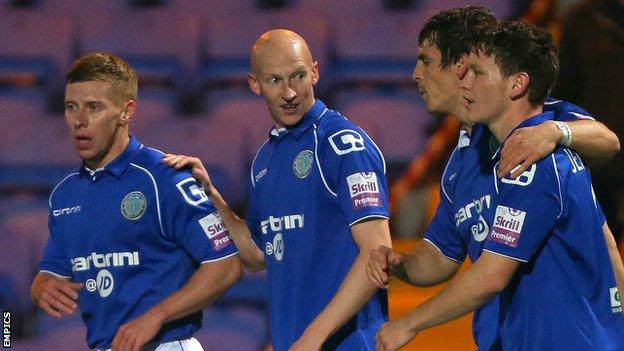 Associate director Andy Scott says was an emotional occasion for all involved at the non-league club.

The Silkmen have been in dire financial trouble, despite a lucrative run to round four of the FA Cup last season.

"A few of us shed a tear today," Scott told BBC Radio Manchester.

"After all the trauma we've had over the past few months and trying to scrap cash together to pay the players' wages - to see those scenes was amazing."

We've still got some very challenging times, but let's forget about that for the time being and cherish the moment because it's been a great day

Macclesfield ended last season £500,000 in debt and revealed in June that they would have been but for the help of Cheshire East Council.

They later caught the headlines by offering a supporter the chance to play part of a first-team game in return for a donation of £20,000 -

Scott continued: "Myself and 10 or 15 other guys have put in a lot of hours and hard work, all voluntary, because we love the football club. We've still got a hell of a job to do to get back on track and it's not over and done with.

"We're still very much under the cosh and financially we've still got some very challenging times, but let's forget about that for the time being and cherish the moment because it's been a great day."

The Silkmen, currently 14th in the Conference Premier, proved far too good for Swindon, who lie seventh in League One.

With Saturday's success, they over the Robins - who were then managed by Paolo Di Canio - at the same stage of last season's competition.

"It's been very well documented that there have been some very tough times at the Moss Rose over the past few months," added Scott, who was formerly the club's vice-chairman.

"[Manager] John Askey, on a very small budget, has put a fantastic young side together. The football we played was top-notch and we thoroughly deserved the victory."