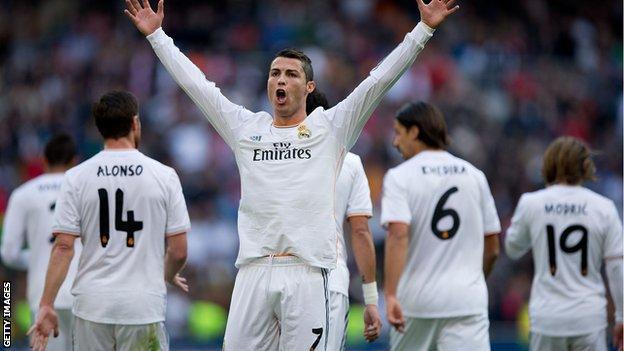 Real Madrid manager Carlo Ancelotti labelled Cristiano Ronaldo "out of this world" after the Portuguese forward scored his 23rd hat-trick for the club.

Ancelotti said: "He scores so regularly and with such incredible ease. It's hard to find new words to describe him.

"Cristiano's talent puts him in a different category altogether."

Ancelotti's side have scored 15 goals in the last three league games, with Ronaldo scoring eight of them.

The former Manchester United forward now has 28 goals in 20 appearances for club and country this season, including four hat-tricks.

Real have won all three league games since losing 2-1 at Barcelona last month.

Ancelotti described his side's first-half display against Sociedad as "perfect" after they established a 4-0 interval lead.

Ronaldo opted to speak about the team's performance rather than his own individual efforts after the match.

"It was a great match and we're all celebrating," he said. "I'm satisfied because things are working well. The team is finding its stride."

"[Bale's] playing very well and I'm happy out on the pitch with him, with Karim [Benzema] and with [Angel] Di Maria," added Ronaldo.