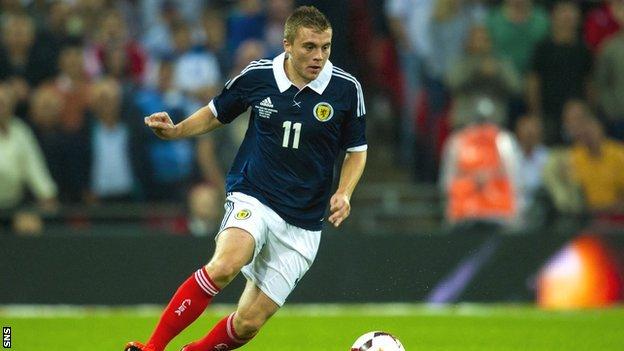 Celtic winger James Forrest is a "major doubt" for Scotland's friendly against the United States on Friday.

Club manager Neil Lennon revealed the problem to BBC Scotland after Forrest was substituted during the second half of Saturday's win over Ross County.

Lennon did not expand on the nature of the 22-year-old's injury, but the winger has been troubled with sciatica.

Gordon Strachan's Scotland squad does not meet until Monday evening ahead of the matches against USA and Norway.

Strachan could give some fringe players an opportunity to shine at Hampden against the USA and then in Molde the following Tuesday.

And he will hope there are no problems for recalled Ipswich Town defender Christophe Berra and Birmingham City winger Chris Burke.

Berra came off 15 minutes from the end of his side's 3-2 win away to Blackpool, while Burke only lasted until eight minutes into the second half of a 3-1 win away to Huddersfield Town.

Strachan will be concerned about the continued lack of game time given to full-backs Alan Hutton and Steven Whittaker at Aston Villa and Norwich City respectively.

James Morrison was only a substitute for West Brom against Chelsea, while fellow midfielder James McArthur was on the Wigan Athletic bench until the final seconds against Yeovil Town.

Striker Steven Naismith was again an unused substitute despite Everton ending goalless away to Crystal Palace.

Sunderland defender Phil Bardsley and Leeds United striker Ross McCormack have also staked their claims for recalls should there be any injury withdrawals.

Bardsley, back in favour at the Stadium of Light after a change of management, scored the only goal in a surprise win over Manchester City.

McCormack, dropped from the squad after the World Cup qualifying win over Croatia, scored all four goals as Leeds United defeated Charlton Athletic in London on Saturday.