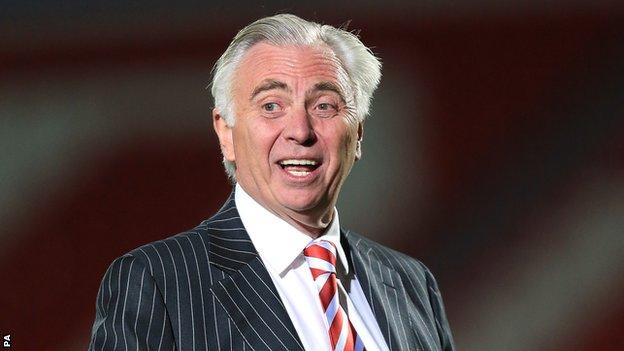 Former Doncaster chairman John Ryan has admitted he is saddened to have brought his 15-year spell at Rovers to an end.

Ryan, 63, resigned from his position on Saturday amid reports of boardroom unrest over a proposed takeover by Irish-led consortium Sequentia Capital.

"I'm proud of my record, the Doncaster fans and the players and management," Ryan told BBC Radio Sheffield.

"It is a very sad day for me, but I felt something needed to change and felt increasingly isolated."

Ryan took over the club in 1998 when they were a Conference side, and his reign has seen them win four promotions, a first major cup in the Johnstone's Paint Trophy and return to the second tier for the first time in half a century.

I was very disappointed the Sequentia deal didn't go through, I thought it was a tremendous opportunity.

But in June, reports emerged of Sequentia's interest in taking over the South Yorkshire club and a heads of terms agreement was signed by both parties.

However, the club began to distance themselves from Sequentia, and issued a statement saying Doncaster would remain in their current investors' hands in September.

And, after resigning on the day his side drew 0-0 at Yorkshire rivals Barnsley, Ryan has revealed his frustration with the deal having yet to be completed.

"I was very disappointed the Sequentia deal didn't go through," he said. "I thought it was a tremendous opportunity.

"I just felt I had one more promotion in me and that was the big one.

"We've got a small fan base and I know some people think we are better off in League One, but that was never my intention.

"I sincerely hope [owners] Terry [Bramall] and Dick [Watson] take the club forward and have great success. No one will be happier than me because I'm a fan and have been since I was seven.

And he still hopes a deal can be done with Sequentia, who are backed by a wealthy Belize-based tycoon.

"I brought that deal to the table, it wasn't anyone else - and I feel that deal was taken away because it was me," Ryan added.

"If I'm not there, maybe a deal can be done, and all at Doncaster Rovers can seriously progress."