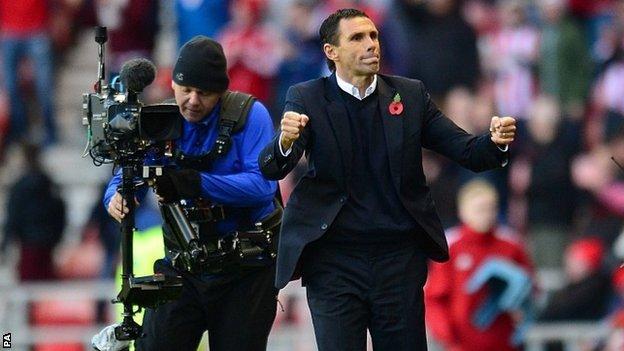 Phil Bardsley scored the goal in the first half as Sunderland hung on for only their second win of the season.

"It is perfection," said Poyet. "It has to be [the biggest] because of the rival, the position and the difference in the squad.

"I am very proud and very tired like I played the game."

Poyet, who succeeded Paolo Di Canio after a successful four-year spell at Brighton, has overseen back-to-back home league victories over Newcastle and City and steered his side into the quarter-finals of the Capital One Cup.

And the Uruguayan believes his team are now playing at a level where they can continue to climb towards Premier League safety.

"Today shows something is going in the right direction," he added. "We need to make sure we all believe.

After falling behind to Bardsley's goal, City dominated possession but struggled to break down a stubborn Sunderland defence.

The defeat was their fourth in the Premier League this season, all of which have come away from home.

Goalscorer Bardsley was not even given a squad number by Di Canio for this season after he was photographed in a casino late at night in May.

But the former Manchester United full-back said he is enjoying his football again after being restored to the first team by Poyet.

"It has been a difficult time for me so to get back in the fold is outstanding," he said.

"I owe the manager a lot because he has brought me in from the cold and I want to repay him."