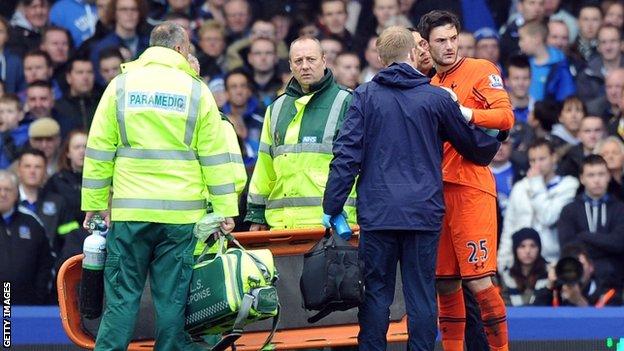 Goalkeeper Hugo Lloris was not included in Tottenham's squad for the defeat by Newcastle on medical advice, even though the Frenchman wanted to play.

Spurs received criticism after Lloris, 26, was allowed to play on after being knocked out at Everton last week.

The medical department advised us not to play the player. I just follow orders.

He added: "Hugo is naturally disappointed as he was keen to return to action, however we feel this decision is in the player's best interest."

Villas-Boas was asked several questions about Lloris's absence after Sunday's match but he was reluctant to speak further on the situation.

The Portuguese had already insisted earlier in the week he stood by the decision made by his medical staff at Goodison Park and that he expected Lloris to return to action this weekend.

And, despite the France goalkeeper not being included in the squad to face the Magpies as Brad Friedel deputised, Villas-Boas backed the way the club have dealt with the injury.

He said: "The medical department advised us not to play the player. I just follow orders.

"If the game was tomorrow he would have played. The medical department deserve respect."

France meet Ukraine in the World Cup play-off first leg in Kiev on Friday and Villas-Boas said he expected Lloris to be fit.