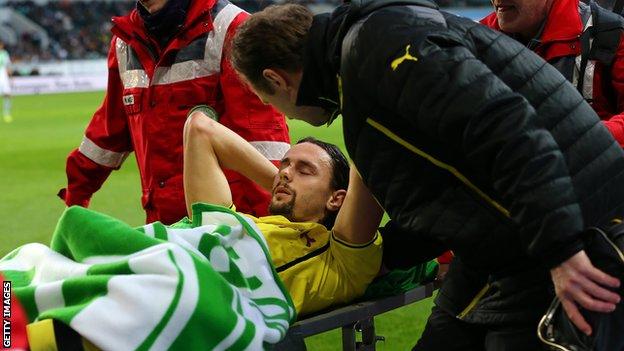 Borussia Dortmund's hopes of winning the German Bundesliga have suffered a setback after defender Neven Subotic was ruled out for the season.

The Serbia international, 24, was carried off on a stretcher during Saturday's 2-1 defeat at Wolfsburg.

Dortmund, second behind Bayern Munich in the table, have confirmed Subotic tore cruciate knee ligaments and will be out for at least six months.

A statement on the club website added: "According to BVB team doctor Markus Braun, Neven will be sidelined for at least six months.

"Subotic sustained the injury in a tackle with Ivica Olic, but the Wolfsburg player cannot be blamed for it."

Having lost 1-0 at home to Arsenal in the Champions League on 6 November, Dortmund have lost their last two matches.

Their next game after the international break is at home to leaders Bayern Munich on 23 November.