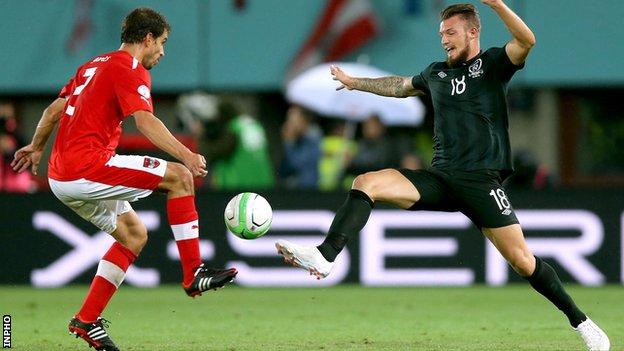 Republic of Ireland midfielder Anthony Pilkington is a doubt for Friday's game against Latvia because of a dead leg.

The Norwich player will remain with the Norfolk club until Thursday as his progress is monitored.

The Republic face the Latvians in Dublin in the first of two friendlies, with the second against Poland in Poznan on 19 November.

Hull winger Brady has a groin injury, while Aston Villa defender Clark is suffering from a foot tendon problem.

Pilkington was forced off with the leg injury during Norwich's win over West Ham on Saturday.

No additional players are being called into the squad for the double-header.

Experienced defender Richard Dunne was omitted from the original squad announced last week as he continues to recover from a groin problem.

New Republic manager O'Neill and his assistant Roy Keane signed two-year contracts last week and O'Neill was introduced to the media at a news conference on Saturday.

QPR central defender Dunne is still trying to overcome the groin complaint which sidelined him for the whole of last season.

There is also room for midfielder Andy Reid, who was exiled from the international scene under former manager Giovanni Trapattoni.