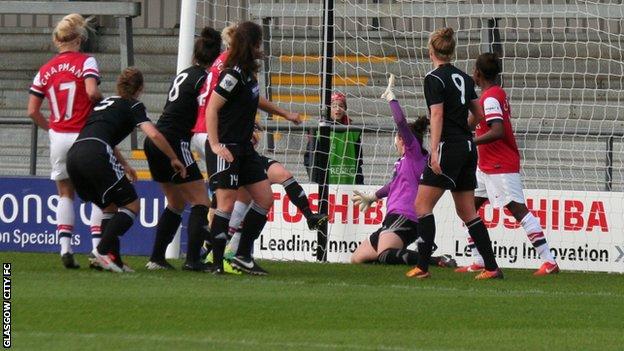 Disappointed but full of praise for his players, Glasgow City coach Eddie Wolecki Black is still dreaming of a Champions League shock against Arsenal.

The Scottish champions lost the first leg of their last 16 encounter 3-0 at The Hive in Barnet.

"Football's a romantic game and there's opportunities in games for comebacks," he said ahead of Wednesday's return.

"The good thing is that, if we can get the first goal, maybe we can give the fans something to shout about."

I think the players will be disappointed that we've lost goals from three set-pieces, two throw-ins and a corner

Arsenal, ranked third in Europe, 12 places above the Scots, are strong favourites to book their place in the quarter-finals for a 12th successive time after the second leg.

But Wolecki Black is banking on a sell-out attendance at Petershill Park inspiring his players as they seek their first quarter-final appearance.

"Hopefully we've got a rousing crowd there and that'll galvanise our players and help us get that wee bit extra and, if we go out, hopefully we'll go out fighting," he told BBC Scotland.

"I take confidence from how far this team has travelled in the last few years.

"It wasn't long ago when we'd have been lucky to get out of the group stages.

"Now we're getting out of the group stage regularly and now we're qualifying last 16 twice in the last three years and this team should get a lot of credit for the advances."

Steph Houghton opened the scoring after 14 minutes in Barnet before supplying the cross for Danielle Carter to add the second just before half-time.

Ellen White's third after the break gives the London side, who lost the English title this season to Liverpool in finishing third in the Super League, a healthy cushion heading for Glasgow.

"I think, if we had gone into half-time at 1-0, Arsenal were getting frustrated, so it was a poor second goal for us," said Wolecki Black.

"Obviously we're disappointed to come away 3-0, but we had to have a solid performance to keep the game alive for the second leg.

"When you're playing top-seeded teams in Europe, it's always going to be a challenge for you defensively.

"I'm never going to fault the players for effort and work-rate - that's a given when they put that jersey on.

"I think they'll be disappointed that we've lost goals from three set-pieces, two throw-ins and a corner."

Wolecki Black agreed that Arsenal had been unable to play their usual flowing style of football.

"We tried to make sure of that and I'm not going to make any apologies for that," he said.

"I think, if people think they didn't perform as good as they should have done, that's to the credit of our players, who have forced them to play slightly differently.

"I know they like to go down the sides and they had to change their plan and come through the middle more."