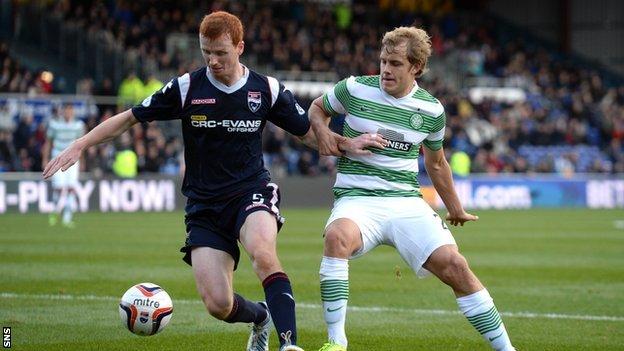 Ross County and St Johnstone have apologised for not observing a minute's silence ahead of their Scottish Premiership matches on Saturday.

In a statement issued on Remembrance Sunday, County said the issue was "an error of omission arising from a failure to address changes in staff responsibilities".

The St Johnstone apology referred to "an oversight".

There were silences held at two of six Scottish Premiership games on Saturday.

One was observed at Aberdeen's home match against Hearts and at Motherwell, where Dundee United were the visitors.

However, in addition to County, who hosted Celtic, and St Johnstone, who were playing Kilmarnock, there was no silence at Easter Road, where Hibernian met Inverness CT, or at Firhill, where Partick Thistle took on St Mirren.

The Jags had offered free admission to the match to all serving Armed Forces personnel.

The Scottish Professional Football League, formed over the summer, does not have a policy on Remembrance Sunday tributes, leaving gestures to the discretion of clubs.

Ross County say the matter is being dealt with internally.

Their statement added: "As a club we are both honoured and humbled by the sacrifice of the men and women who have given of themselves for the benefit of others in times of war and conflict, particularly throughout the past 99 years and even more so as we approach the centenary of the outbreak of the First World War."

St Johnstone published an apology on their website on Saturday.

The statement said: "This very important occasion has always been acknowledged by the club in the past and, as is the case every year, poppies have been on sale at McDiarmid Park in the run-up to Remembrance Day.

"We offer apologies to any supporters who were disappointed at the lack of a silence."