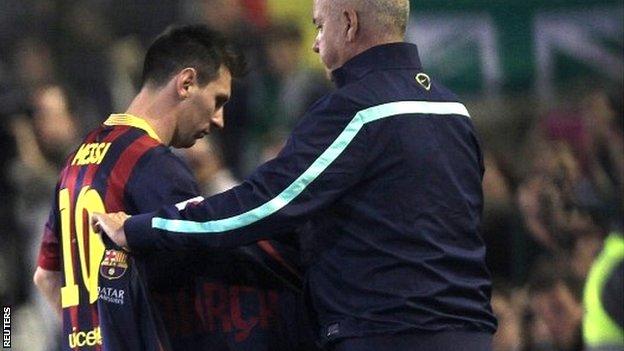 Lionel Messi was again taken off with a leg injury in Barcelona's 4-1 victory over Real Betis on Sunday.

The 26-year-old pulled up as he tried to accelerate with the ball at his feet after only 18 minutes of the game.

Barcelona confirmed that Messi injured the femoral biceps in his left leg and he will have further tests on Monday.

"The injury to Messi doesn't have anything to do with the previous ones because it is in the other leg," said Barca coach Gerardo Martino.

"I don't know anything about medicine so I will wait to see what the doctors say to me about how serious the injury is.

"We also need to speak with Leo, it is the third episode he has had in a short time so it is obviously playing on his mind."

The Argentina international and World Player of the Year also came off in August against Atletico Madrid with a hamstring problem and injured his thigh against Almeria in September.

"It's never good news when a player has another injury, and above all when he is named Lionel Messi," added Barcelona sports director Andoni Zubizarreta.

"My opinion is that we can't rush him back."