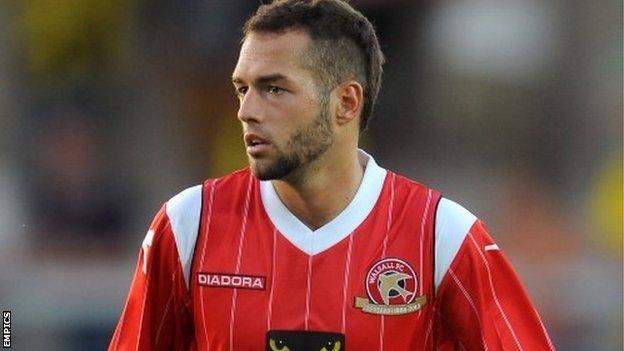 Walsall struck in each half to see off third-placed Peterborough and earn their first points in three matches.

Romaine Sawyers then added a deserved second on 69 minutes when he fired home left-footed from 15 yards.

Posh had Sean Brisley sent off for a second booking before Walsall missed a late penalty when Ashley Hemmings' weak kick was saved by Bobby Olejnik.

Brisley, already booked for a foul on Craig Westcarr, went for a clumsy challenge on the lively Lalkovic, his second bookable offence, as Posh succumbed to a third straight League One defeat.

After Posh full-back Craig Alcock's fierce shot was tipped onto the bar by home keeper Richard O'Donnell, the Saddlers then went close when centre-half Paul Downing's toe poke was denied at close range by Olejnik.

But former Aston Villa trainee Olejnik was left powerless when, having just swapped to the left side, Lalkovic weaved his way in from the flank to slip a neat finish under him.

Walsall top scorer Westcarr should have made it two after the break when he fired straight at the keeper after being set free by a poor backpass from Grant McCann, while home centre-half Downing had a header cleared off the line by Posh striker Britt Assombalonga.

The disappointing visitors were nearly let in but Nathaniel Mendez-Laing could not take advantage of another loosely-hit backpass by Andy Taylor.

Instead, the sparkling Saddlers went up the other end to wrap up victory - and a rise of four places back up the table to seventh.

Lalkovic set up Sawyers, who should immediately have added a second when he too was sent clear by the third comically underhit backpass of the night.

But the best chance for a Walsall third came in the final minute of normal time when Posh sub Gabriel Zakuani was adjudged to have fouled Downing in the box, Olejnik going low to his left to keep out sub Hemmings' feebly struck left-foot penalty.

"It was a good pass and move then an excellent finish from Milan Lalkovic to get us going and we never looked back from that.

"The only thing missing was that we could have scored a few more.

"Our aim at the start of the season was to be competitive in every game but, if we keep playing like that, we'll beat anyone.

"We actually feel a little bit disappointed with our points return, given how consistently well we've played, but this is a tough league."

"It's very rare when you get a game in which every player on the other team are better than yours. But you have to give credit to the opposition. Walsall are a good team.

"Sean Brisley's challenge was silly at that stage of the game when he'd already been booked. That's four red cards we've had now which does not make it any easier.

"We've hit a blip and it's up to me to do what I can to get our form back but there will certainly be changes. I know what I really want to do but it's just disappointing that we can't do anything about it until January."