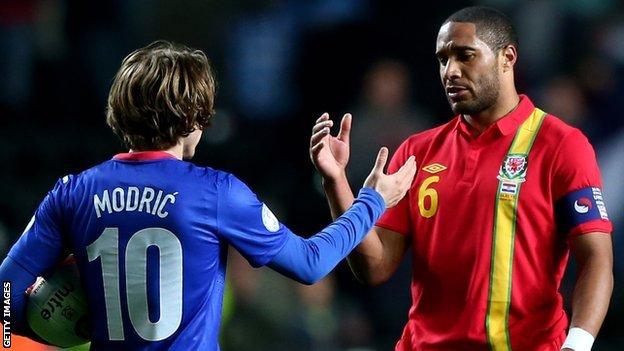 Wales captain Ashley Williams has said he hopes Chris Coleman's reign as Wales manager does not end after his side face Finland in Cardiff on Saturday.

It is understood Coleman, linked with the Crystal Palace's managerial vacancy is likely to continue in his role.

Williams would welcome Coleman staying. "It's good news for me," he said.

Wales finished fifth out of six teams in their 2014 World Cup Group A qualifying campaign, leading to uncertainty over Coleman's future.

But after his side beat Macedonia at home and drew at unbeaten group winners Belgium in their final two qualifiers, the 43-year-old former Fulham and Coventry boss now seems assured of continuing in his current role.

Wales will be bidding for one of the 24 places available at the 2016 European Championships in France - an increase of eight on past tournaments.

Hughes, who managed Wales between 1999 and 2004, said: "They've got a good group of players now. With the next campaign having a few more qualification places up for grabs, I think Wales certainly have an opportunity to [qualify] so I wish them well."

"And I think - I'm hoping - we can only get better underneath him and, as players, we'd obviously like him to stay."

John Hartson, the former Wales striker who stepped down as a Wales assistant coach last week, has already said he expects Coleman to stay on with the national team.

Coleman's contract expires after Saturday's friendly with Finland at the Cardiff City Stadium, for which he has named a full strength squad.

His former club Palace parted company with Ian Holloway in October after a disappointing start to their first season back in the Premier League.