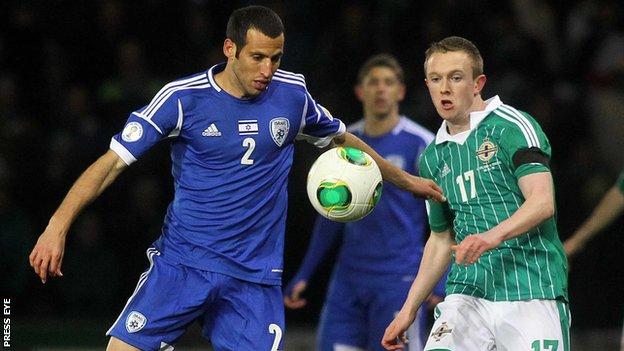 Shane Ferguson is the latest withdrawal from the Northern Ireland squad for Friday's friendly against Turkey.

The Newcastle winger, currently on loan at Birmingham, did not travel to Turkey because of illness and his absence was confirmed on Wednesday afternoon.

Hibernian defenders Ryan McGivern and James McPake were both added to the squad by O'Neill on Tuesday while New York Red Bulls midfielder Jonny Steele was called up last Friday.

McGivern, 23, has earned 19 Northern Ireland caps while McPake, 29, won his solitary cap in the 6-0 friendly hammering by the Netherlands last year.

On Monday, the Irish FA said that central defender McAuley had withdrawn from Friday's match for personal reasons with his West Bromwich Albion team-mate Brunt ruled out by groin and knee injuries and Rotherham midfielder O'Connor absent because of a thigh strain.

Derby striker Ward then pulled out of the squad on Tuesday because of a bruised foot while Ferguson's withdrawal reduces O'Neill's squad to only 18 players.

Palermo striker Lafferty is unavailable as his wife is due to give birth on Friday, while midfielder Evans and defender Cathcart are injured.

Steele, who is from Larne and had a brief spell with Ballymena United, was a late call-up by O'Neill after some eye-catching performances in Major League Soccer.

The 27-year-old, who joined the Red Bulls in February, was called up after his side's involvement in the MLS Cup ended with defeat by Houston Dynamo last Wednesday.

O'Neill had earlier emphasised Steele was part of his plans and said he had discussed the player's progress with the New York club's technical director, Andy Roxburgh.

"Jonny is one of those players who has developed later in his career and it is good to have him on board," said O'Neill.

Turkey finished fourth in their World Cup qualifying group behind the Netherlands, Romania and Hungary.

The Turks, managed by Fatih Terim, won five, drew one and lost four of their qualifiers and lie 40th in the Fifa world rankings, 50 places above Northern Ireland.

O'Neill's side won one game in World Cup qualifying, finishing fifth in their group.