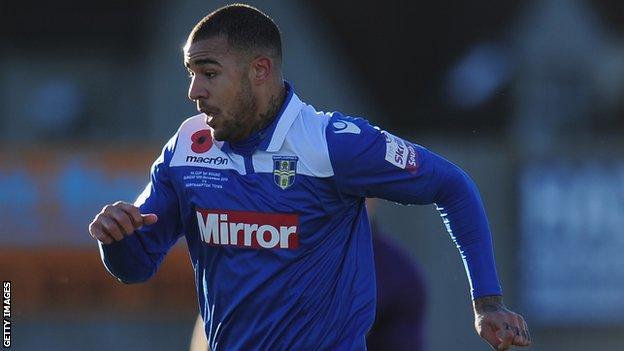 The 21-year-old will sign a deal until 2016, with the transfer window not applying to non-league clubs.

Vassell has scored 16 goals in 16 games for the Conference South promotion-chasing side this season.

Do not call me Dwight Gayle

Kyle Vassell has been compared to Dwight Gayle, the striker who scored 42 goals in the 2010-11 season during a loan spell at Bishop's Stortford.

Gayle joined Peterborough from Dagenham & Redbridge and now plays in the Premier League with Crystal Palace.

But Vassell has frequently asserted that he is not the new Dwight Gayle.

He follows in the footsteps of ex-Stortford striker Dwight Gayle, who had a prolific spell with the Blues before joining Posh

Vassell played his last game for Rod Stringer's side on Sunday, the televised in which he came off with a dead leg.

Afterwards he told the Herts & Essex Observer: "I'm disappointed I'm leaving, but at the same time it's a new chapter in my life.

"I need to try myself at a higher level and see what I can do and try to enjoy it as much as I have here.

"Peterborough's track record of dealing with non-league players, strikers in particular, is second to none.

"Don't get me wrong, it's a great level for me to play at and a great opportunity, but I don't see myself finishing there.

"So going to a great club like that with a track record of moving players on as well, it's ideal for someone like me."

The move concludes a good week for Stortford's finances, which were also boosted by money earned from their FA Cup run.