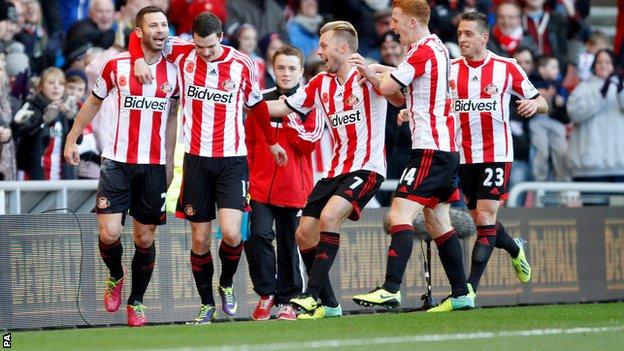 Last May, after being pictured at a casino in midweek.

Three months later and launched an investigation after he allegedly mocked their opening-day defeat by Fulham on social media.

"I let myself down with what I did. By playing well and showing I care, maybe the fans might like me again," he said.

Bardsley has started all five games since scoring in the as well as the victory over City.

The 28-year-old's reintroduction received a mixed response from the club's supporters, not helped by the defender in his first game for five months.

But since that game, Poyet's men have won three out of four matches and conceded only three times - Sunday's win ended their eight-month wait for a clean sheet.

"After everything that happened I knew I had to perform, so an own goal obviously made it even more difficult," Bardsley told BBC Newcastle.

"But I thought I did OK in the first half of that game. It's nice to score a couple of goals and I think my overall performances are getting back to my best."

Bardsley back in the fold

Before his first-team suspension began, Bardsley suffered an injury-ridden 2012-13 season. Prior to that, he had been a Sunderland mainstay during his four-year spell on on Wearside.

He has now made 172 Black Cats appearances.

The club had already ended Bardsley's suspension, but he had only recently returned to training after breaking his foot while playing for Sunderland's Under-21 side.

"The injury made it even tougher for me and when Gus arrived he gave me a chance and I was determined to take it with both hands," he added.

"I always believed that I had more to offer this football club and didn't want to leave with people's memory being what happened over the summer.

"I'm grateful for a second chance and hopefully I've gone some way to turning their thoughts around."