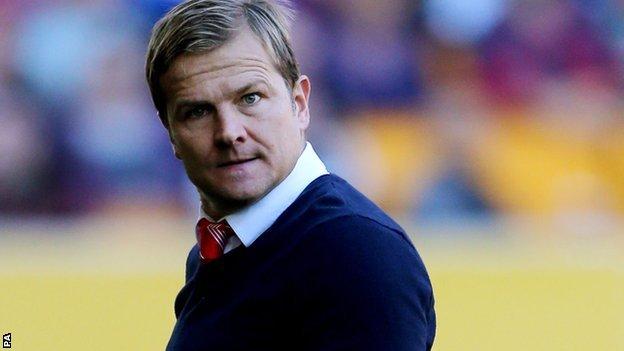 Swindon's players and staff plan to reimburse travelling fans who saw them lose 4-0 at Macclesfield in the FA Cup, boss Mark Cooper has revealed.

The Conference Premier outfit convincingly beat League One Swindon on Saturday to reach the second round.

Cooper apologised to supporters after the game and told BBC Wiltshire on Monday: "We've agreed to cover the cost of the fans that travelled.

Swindon took 305 supporters to Macclesfield's Moss Rose on Saturday, with the most expensive ticket in the away end costing £18 - meaning the League One club will have to pay out up to £5,490 in refunds.

"Not because we're creeping, it's a gesture of appreciation."

He added: "I just made sure the players knew it was unacceptable."

It was the second time in as many seasons that Swindon have lost to Macclesfield in the FA Cup, after last year's 2-0 defeat in the first round, and the non-league club will now host either Gillingham or Brackley Town in the next round.

Following the first-round exit, Swindon confirmed they will be giving fans who made the trip to Moss Rose a refund on their matchday tickets.

"It was the worst game I've been involved in as a manager," continued Cooper.

"I felt sick all weekend. I just felt horrible. When your mind goes back to the game, you're just trying to quantify it and work out what went wrong.

"I've had numerous chances to look at it and it doesn't get any better. The fact we were so good the week before against Port Vale but so bad against Macclesfield is mind-boggling.

"But that's management - it's a game of snakes and ladders. We have to move on."

Swindon are seventh in League One - level on points with Bradford, who occupy the final play-off place - but they have taken only four points on the road this season.

And Cooper hinted he could be tempted to make changes for their next league game at Colchester.

"We have to come up with something and solve the problem," he added. "Away from home we might have to sacrifice a bit of skill until we can trust players to play properly."