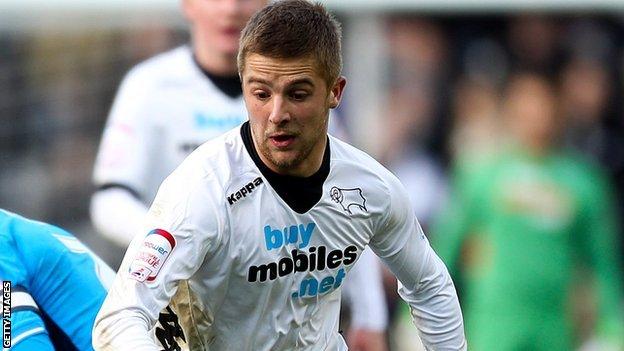 Jacobs, 22, has made nearly 50 appearances for the Rams since being signed by Nigel Clough from Northampton Town in July 2012, the majority from the bench.

But he is still to make a league start this term for the Championship side.

Jacobs will join the competition for midfield places at Kenny Jackett's promotion-chasing League One outfit.

While he could be viewed as back-up to Bakary Sako, should there be any more interest in the French winger prior to the transfer window reopening again in January, Jacobs can also play in central midfield.

Wolves' central midfield duties have so far been largely shared this season by a combination of David Davis, youngsters Jack Price and Lee Evans, and Kevin McDonald - who joined the club in August.

But Jamie O'Hara, transfer listed in the summer, has also been back in first-team contention of late - though he was left out of the squad for the FA Cup first-round match at Oldham on Saturday, possibly to avoid him being cup-tied should he move in January.

And Dave Edwards has now regained full match fitness after sustaining a foot injury on the opening day at Preston, completing his first 90 minutes in eight months in Wolves' 1-1 draw at Boundary Park.

"Dave is at an age now of 27 where he is probably coming into his prime," Jackett told BBC WM.

"If he is able to stay fit, he will be able to contribute for us. He has the ability to run from midfield and get goals.

"Nobody has ever said that Dave isn't good enough. He has just been unfortunate with injuries."