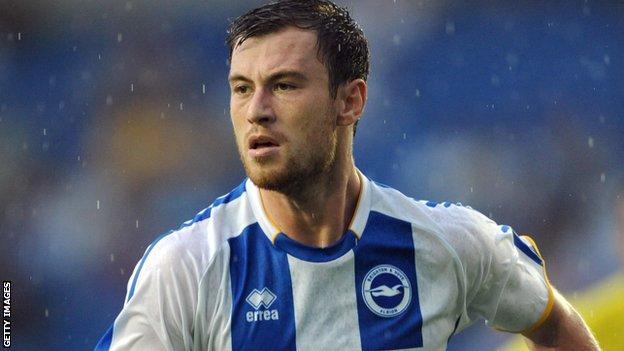 Barnes scored a first-half penalty in the 3-0 Championship win over Blackburn on Saturday and then added a close-range finish in the second half.

"It took so much pressure off me, just scoring that penalty," the 24-year-old told BBC Sussex.

"You try not to let it get to you, but it does. It is one of those things in football. I am so happy and relieved."

Before the Rovers game, Barnes had only scored one goal this season - coming in the Capital One Cup defeat by Newport in August.

The former Plymouth man has been leading the line in recent weeks, with striker Leo Ulloa sidelined with a foot injury.

Barnes jumped at the chance to end his drought from the spot, despite missing twice from 12 yards last season.

"I got banned last year with Gus [former Brighton manager Gus Poyet] but I am back on them," he said.

"I am confident in my own ability and I know I can put it in the back of the net."

Barnes' second goal on Saturday, capitalising when Rovers keeper Jake Kean failed to hold onto a shot from Andrew Crofts, was his 50th goal for the Seagulls.

Barnes has made 160 appearances for the Sussex club.

"I didn't know it," he said. "I've been waiting for something all season and then it falls to me. I'm delighted to get two goals and that we won."

"He deserves it," Garcia said. "He works hard, not just today but in all the games and practice."