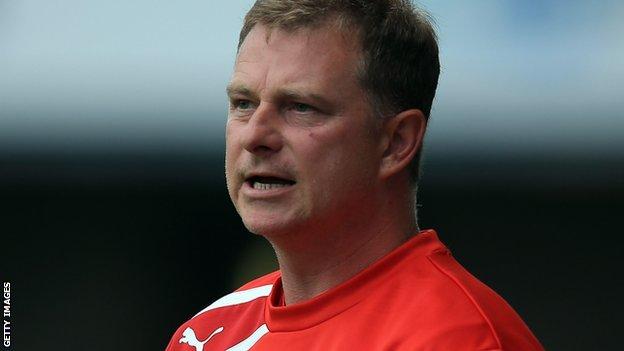 Huddersfield Town boss Mark Robins said he was angry with his side's performance in the home defeat by Birmingham on Saturday.

The Terriers lost 3-1 to Lee Clark's Blues, after conceding two goals from set-pieces.

"Right from the first whistle we were awful," Robins told BBC Radio Leeds.

"It was totally abject and it's very difficult to put your finger on it when that happens. I'm angry because it's a game we should have won."

We've got what we've got and we have to be the best we can be. It's about how we bounce back from this now

Robins continued: "We allowed Birmingham to come here and take the points because it was a poor game and if we'd played the way we had for the most part of the season we'd have won comfortably.

"I take responsibility for the results but I need the players to deal with it when the ball gets flung into our box."

Huddersfield lost skipper Peter Clarke with a knee injury early on and Robins fears the 31-year-old could be out for as long as eight weeks.

The Terriers have now lost four of their last five games but the manager does not envisage being able to make major changes before their next match with Sheffield Wednesday on 23 November.

"Everyone has to stand up and be counted because we don't have a bottomless pit of resources," he said.

"We've got what we've got and we have to be the best we can be. It's about how we bounce back from this now."