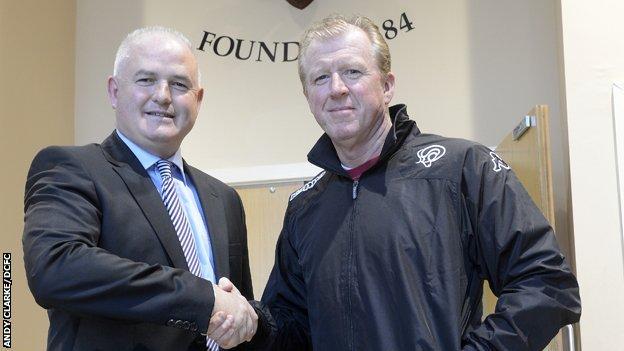 The 51-year-old former assistant to Gary Megson at Bolton and Sheffield Wednesday will be in charge of scouting and recruitment at Pride Park.

The position was created after ex-England boss McClaren took the helm as head coach in September.

Chris Evans played as a defender for Arsenal, Stoke City, York City and Darlington before taking the role as senior football development officer in Wales in 1988.

In 1991 he moved to Wolverhampton Wanderers where he spent 16 years in various roles before joining Gary Megson as assistant manager and performance director of Bolton Wanderers in 2007.

The 51-year-old would again work as Megson's number two at Sheffield Wednesday in 2011.

"Chris' arrival is extremely important for the way we want to operate," McClaren told the club website.

"He has a vast amount of experience in a variety of roles during the last 34 years in the game and he will be instrumental in the way the football department operates on a day-to-day and week-to-week basis."

When the former York City and Darlington defender retired from playing, he returned to Wales and moved into player development.

In 1991 he started a 16 year association with Wolverhampton Wanderers where he worked in variety of positions from reserve-team coach and chief scout to academy director.

In addition to working as Megson's number two at Bolton and Wednesday, Evans also served as caretaker boss at the Reebok in 2010.

Ex-Cardiff City head of recruitment Iain Moody was linked to the newly-formed job at Pride Park before taking a similar post at Crystal Palace earlier this month.