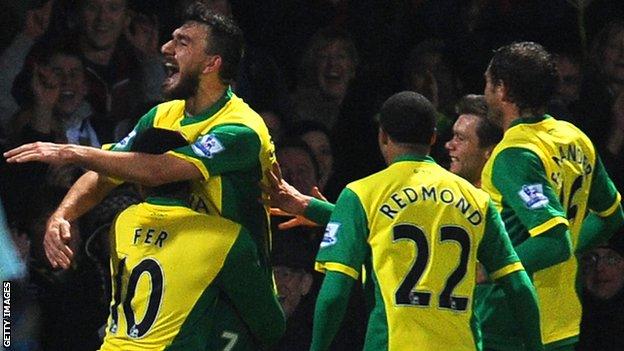 The Canaries went 10 games without defeat between the end of October and mid-December in the 2012-13 campaign.

"It was this time last year, against Arsenal, that was a turning point in our season," Scotland international Snodgrass told BBC Radio Norfolk.

"So hopefully that can be the case this time too."

Norwich were 19th in the Premier League when they beat Arsenal 1-0 on 20 October last year, and finished their remarkable run in seventh.

The rest of the campaign proved a struggle, though, with the Canaries only securing safety on the penultimate day of the season.

This time around, Chris Hughton's side hosted the Hammers off the back of four games without a win and lying 18th in the league.

But victory put them up to 15th with 11 points - the exact same position and points haul at this stage 12 months ago.

"We hope it's a turning point," said Hughton.

"We had a similar run last season round about this stage and we hope it's one again this season."

Snodgrass, who scored his side's second goal with a well-struck free-kick, took a boot to the face in the game, less than two weeks after he was knocked out in a League Cup defeat at Manchester United.

"It doesn't matter what happened. The most important thing is I put my body on the line for this club," he said.

"That's what we need to do if we're going to survive in the Premier League."