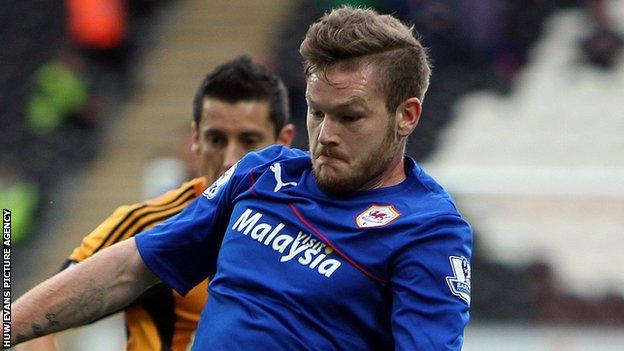 Cardiff City midfielder Aron Gunnarsson has confirmed the shoulder he injured at Aston Villa was not the one he dislocated in the summer.

Gunnarsson came off during the second half of the 2-0 defeat but insisted it was not a serious problem.

"It's a little bit bruised but it's nothing to worry about," he said.

The 24-year-old will now join up with the Iceland squad ahead of their two-legged World Cup play-off against Croatia.

He had dislocated his shoulder after a heavy fall during Iceland's World Cup qualifier against Slovenia in June.

The former Coventry City player initially feared he had suffered a similar injury during Cardiff's defeat at Aston Villa on Saturday.

"At the time I obviously fell heavy on it and it was quite similar to how I had done my other shoulder.

"Thankfully I landed on my other one - it was the good shoulder that I fell on."

Gunnarsson's attention now turns to Iceland's World Cup play-off against Croatia in Reykjavík on Friday night with the second leg in Zagreb next Tuesday.

Iceland have never qualified for the World Cup finals and Gunnarsson is fully aware Lars Lagerback's side are on the brink of an historic achievement.

"Iceland is a small country and getting that far in this competition is brilliant.

"If we get into the World Cup I think that will be the best thing ever.

"We're a young team and we are hungry and hopefully we'll take that to the game even though we know Croatia has got the experience of getting to the World Cup.

"All the pressure is on them and we've just got to go there and enjoy it.

"We are really proud of where we come from and doing well for the country is something we've always wanted to do."