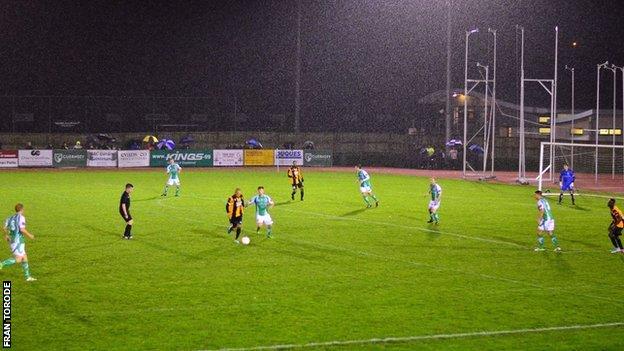 Guernsey FC boss Tony Vance has said his side paid the price for not being "ruthless" enough in their 1-1 draw with Three Bridges.

The Green Lions kept up their unbeaten record, stretching back to 26 August, but Vance said three points were there for the taking with better finishing.

"Their keeper had one of those nights where it was very difficult to beat him," he told BBC Guernsey.

"But if we'd been ruthless in the first half we could have been out of sight."

He added: "They took advantage of us being a bit off it but their goalkeeper can be very proud of the fact he earned his side a point.

"We had a 10 or 15-minute spell where we were a bit lacklustre and they made us pay for it."

The match was played in torrential rain at Footes Lane and Vance admitted that conditions had made a huge difference to proceedings.

"It made things very difficult," he said. "In the second half it got a bit ridiculous and the conditions probably won!"

Prolific striker Ross Allen again got on the scoresheet for the club, with his 11th league goal of the season taking him to the top of the Ryman League South goalscoring charts.

"He's an unbelievable talent," said Vance. "Ross could have had a hatful if the keeper hadn't won that personal duel but he hit the target a number of times."