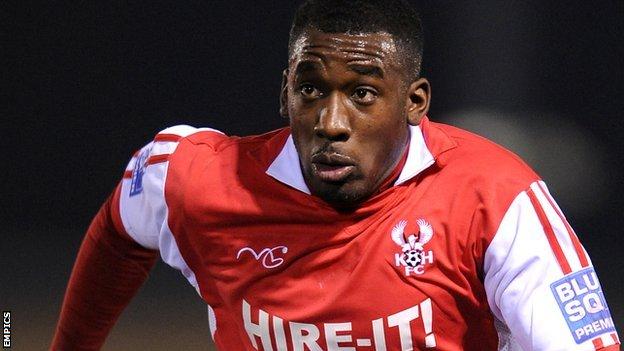 Kidderminster Harriers have extended striker Amari Morgan-Smith's deal until the end of the season.

The promotion-chasing Conference Premier side have also signed defender Aaron Brown on a short-term deal.

The experienced ex-Tamworth, Aldershot and Leyton Orient stopper, 30, was on the bench for Saturday's 4-1 FA Cup first round win over Sutton United.

The much-travelled Brown has been kept waiting for international clearance after his most recent stay at Limerick.

Amari Morgan-Smith is getting stronger with each game

But his move to Aggborough on a short-term deal has now coincided with first-choice centre-half Chey Dunkley's return to full fitness after 10 matches out with a knee injury, during which time Josh Gowling has been paired with Jamie Grimes.

"With Chey coming back in we may have to look at the situation with Aaron," said boss Steve Burr.

"As a utility player he will useful to us. He's someone I've come across before. He was involved with the England C team a few years back.

"It has been frustrating not just for the club but for the player as well.

"We didn't have any real cover if anything happened to Josh or Jamie at centre-half.

"But whether we can keep him on for a bit remains to be seen."

As for Morgan-Smith, Saturday's crucial equaliser against Sutton was the 24-year-old's third goal in 11 appearances since the former Harriers loan signing returned to Aggborough in September.

"He's getting stronger with each game," added Burr. "At the time he came in it was just a case of seeing how things developed but we knew what he was capable of doing.

"And it was nice to see him in amongst the goals at the weekend."

After initially arriving at Aggborough on loan from Macclesfield Town in February, although he only scored once he was on the winning side in all five games.

Morgan-Smith, who began his career at Stockport County, spent a year with Ilkeston before being signed by Luton Town, where he spent two seasons.

He joined Macclesfield in the summer of 2012 but had scored just twice in 20 appearances before being loaned out for his successful stay at Aggborough.

He then became a free agent this summer following his release by the Silkmen, who Morgan-Smith will face the first time since his departure at the Moss Rose on Tuesday.