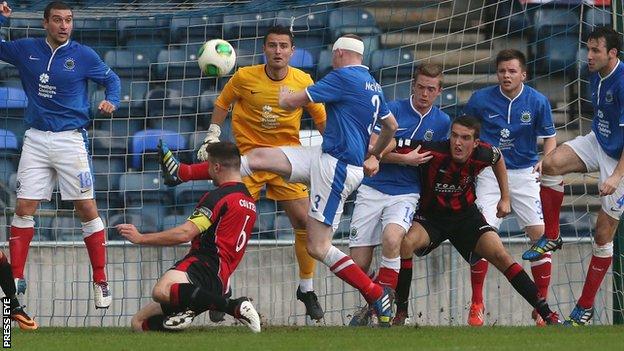 The Crues will put their 17-match unbeaten run on the line while Linfield have gone 16 games without defeat.

"That's what we are in football for - to play games like this," said Baxter.

"It's a big test for us going to Windsor. Linfield are flying at the minutes and scoring goals for fun but we are also going well."

Grant will be joined by Coleraine boss Oran Kearney at the Showgrounds for the game between Ballymena United and Portadown.

Linfield take on Crusaders in our other commentary game with Michael McNamee and Paul Kirk taking you through the action at Windsor Park.

We'll also have regular reports from Solitude and Mourneview Park.

Linfield's superb form has taken them to the top of the Premiership, with the Crues six points behind in second.

"They got off to a faltering start, as we did, but the cream always rises to the top," added Baxter.

"They's so many stars in the side, they are class acts although I'm proud of the achievements of this football club in the last four to five years.

"We've played Linfield twice this season, winning one and drawing the other, and both have been very close games.

"They've been good battles and I expect Tuesday night will be one of many more before the end of the season."

Glenavon host Ards at Mournview Park while Portadown make the trip to take on Ballymena United.

Sky Blues manager Glenn Ferguson is wary of the Ports strike-force ahead of the Showgrounds clash.

"When you have Gary Twigg, Kevin Braniff and Darren Murray in your line-up you are always going to create chances and win games," said Ferguson.

"Portadown are the best team we've played this season. so it's going to be difficult and we must convert the opportunities we get."

Cliftonville pair George McMullan and Ronan Scannell are injury doubts as the Reds continue their defence of the cup with a Solitude encounter against Championship side Bangor.

"We're keen to hold on to the cup and there will be no drastic changes from Saturday's win over Ballymena," said Reds boss Tommy Breslin.

"Bangor have been playing well and they will come here with nothing to lose, but hopefully we can build on Saturday's victory and get into the semi-finals."