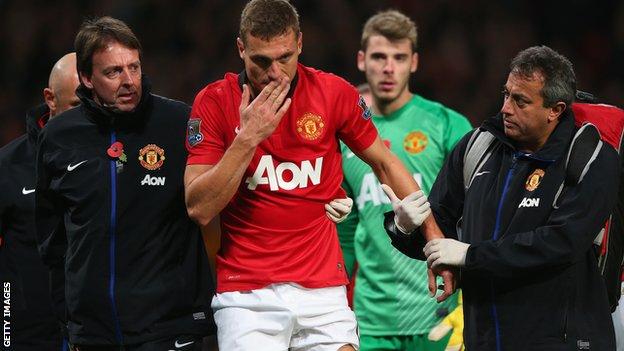 Manchester United captain Nemanja Vidic has been released from hospital after he suffered concussion in Sunday's 1-0 Premier League win against Arsenal.

The ex-Serbia defender, who got to his feet, was taken to hospital for an examination before returning home.

"Nemanja Vidic has been released from hospital after suffering concussion," said a United statement.

Vidic was left dazed after being caught on the head by De Gea as the Spaniard punched clear a high ball.

He is not likely to play again until 24 November when United visit Cardiff in the Premier League following the international break.

United have not put a timescale on a return to training for Vidic, who quit playing for Serbia in October 2011.

His injury came less than a week after Tottenham were criticised for allowing goalkeeper Hugo Lloris to continue playing after he was knocked out against Everton.