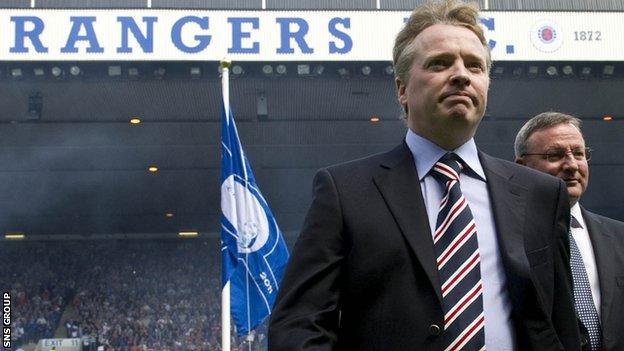 Police are investigating whether former owner Craig Whyte is still involved at Rangers.

When the Scottish FA transferred the liquidated company's membership to a new company "the key requirement" was the total lack of involvement of Whyte.

Those documents lie at the heart of Whyte's claim he and former chief executive Charles Green colluded over Green's purchase of Rangers' assets.

Former club chairman Malcolm Murray, now part of a group led by businessman Jim McColl seeking to be elected as a new Rangers board, quelled talk of Whyte's involvement.

"I'm pretty sure he [Whyte] is not involved at all," Murray told BBC Radio Scotland's Sportsound programme on Monday.

I'm pretty sure he [Whyte] is not involved at all

"I was given assurances, as the SFA were, that he wasn't. I said I wouldn't go any further if he was."

Police have written to Green, who has called into question the documents filed in relation to Sevco 5088, to ask for his help in their enquiries.

Green stood down from his position in April following Whyte's allegations, though an investigation funded by Rangers cleared Green of any wrongdoing.

Police Scotland have been passed files by the law firm Pinsent Masons, who carried out the investigation that cleared Green.

BBC Scotland has seen an email sent by police last month to a lawyer representing the former chief executive.

A source close to Green told BBC Scotland that he is co-operating with police, while a similarly placed source for Whyte says police have not contacted the former owner on the matter.

The investigation is being carried out by Police Scotland's Economic Crime Unit.