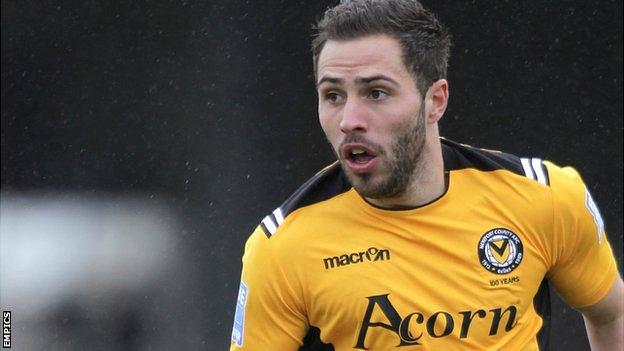 Robbie Willmott's sweet first-half free-kick was enough to defeat Braintree Town and take Newport County into the second round of the FA Cup.

But the best chance of a tight first-round replay fell to the non-league side when Matt Paine wasted a free six-yard header with the score goalless.

Newport keeper Lenny Pidgeley was also forced into a fine diving save from away substitute Liam Enver-Marum after the interval.

But the Welsh side rarely looked like surrendering their lead and posed the greater threat in the second period.

Adam Chapman nearly made it 2-0 with a superb strike that forced a fantastic save from Nick Hamann.

However, Newport did not need a second goal, despite a spirited Braintree finale, and the hosts go through to face Kidderminster Harriers at Aggborough in the second round.

"We knew it was going to be tough. Braintree are having a good season, didn't have anything to lose really and came here and gave a good show.

"It was about attitude tonight. To be fair to the boys they had a go. The pitch was a bit bobbly and we did try and pass it at times.

"We weren't as good as we were [against] Hartlepool but you're not going to be great every week."