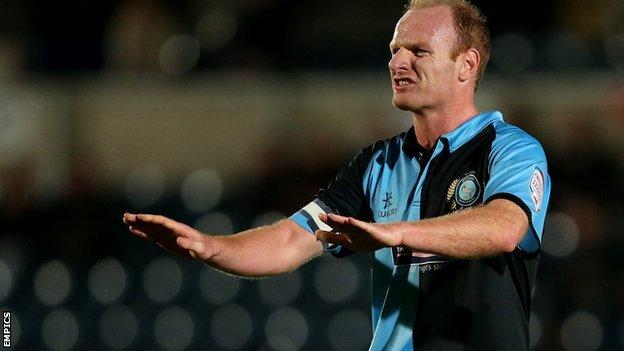 Steve Craig netted the opener from the penalty spot on 50 minutes.

Craig was brought down by rookie keeper Ben Garratt, who had fumbled Mark McCoy's 25-yard shot.

Wycombe were FA Cup semi-finalists in 2001 but were beaten 2-1 by eventual winners Liverpool.

Gary Doherty, an FA Cup semi-final goalscorer with Spurs in 2001, wrapped up a deserved first-round replay win on 70 minutes, prodding in from six yards.

Billy Knott flicked on Anthony Scowen's corner and 33-year-old Doherty slid in to score only his second goal this year.

Crewe boss Steve Davis made four changes to the team hammered 5-0 at Brentford on Saturday, including the introduction of 19-year-old Garratt in goal.

But it had little impact and, out of a meagre crowd of 1,695 on a freezing cold night, only the 81 visiting fans from Buckinghamshire returned home happy.

"To go out without a whimper is really disappointing. About as low as it can get.

"We're playing League Two opposition. We've got to do better than that.

"There was a low crowd and a lack of atmosphere, but we've got to generate the atmosphere. We just lost our way totally.

"I had to give Ben Garratt a little go tonight. as the other two keepers have been struggling. It's a night he won't forget, that's for sure."

"It was a great performance. We played the right tactics. The boys were committed.

"Shapes don't mean anything unless you're willing to run and back your team-mates.

"It's a great feeling, a great place to be at the moment and hopefully we can take it into Saturday against Chesterfield.

"It sets up a brilliant tie with Preston in the second round. It's a club close to my heart. I'm sure the boys will be looking forward to that one."