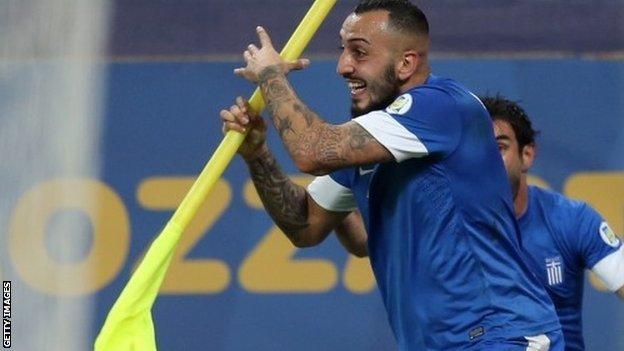 Greece booked their place at the 2014 World Cup with a 1-1 draw in Romania to complete a 4-2 aggregate play-off win.

Leading 3-1 from the first leg, the Greeks soaked up some early pressure before Konstantinos Mitroglou beat the offside trap to put them ahead.

Romania were gifted a bizarre equaliser after the break when Greece defender Jose Holebas's clearance hit Vasilios Torosidis and span into the net.

But Greece saw out the rest of the game to ensure they will be going to Brazil.

Romania's wait to qualify for their first World Cup since 1998 goes on, but Greece are through to their second successive finals, and their third in total.

Fernando Santos's side will head to South America in confident mood - they have now won 18 of their last 24 games and their progress was never seriously in doubt in Bucharest.

Romania, roared on by 50,000 fans at the National Arena, began brightly enough and Gabriel Torje was a menace down their right flank, but Greece remained dangerous on the break.

Home keeper Ciprian Tatarusanu had already denied Holebas before Olympiakos striker Mitroglou, who scored twice in the first leg on Friday, ran clear to slot home his third goal of the tie.

Romania struggled to turn their superior possession into chances but were given hope after 55 minutes thanks to the mix-up between Holebas and Torosidis on the edge of their own area.

That triggered Romania's best spell of the night, but a finish of their own continued to elude them.

For all their possession, Ovidiu Hoban's low drive was the only time they seriously tested Greece keeper Orestis Karnezis in the closing stages and the visitors appeared comfortable long before the final whistle.

"I thank God and I thank the players who were fantastic. We are going to Brazil and that's amazing.

"I think it is a great thing for Greece that we are going to our second consecutive World Cup. And certainly this is a huge moment for me, personally."