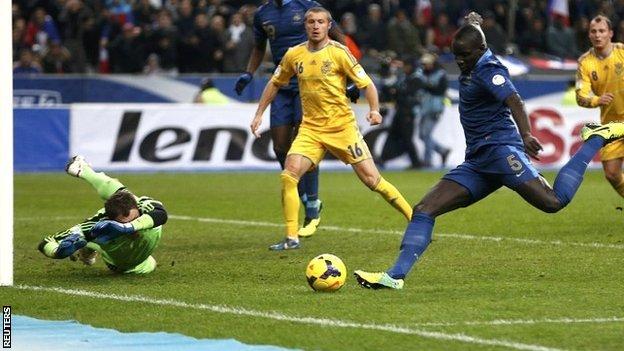 France became the first European team to overturn a 2-0 first-leg deficit to reach the World Cup with a thrilling 3-0 victory over 10-man Ukraine.

Mamadou Sakho tucked in Franck Ribery's shot and Karim Benzema levelled the tie from an offside position, having been wrongly denied by the flag earlier.

Ukraine's Yevhen Khacheridi was sent off early in the second half.

And the tie was decided when Sakho converted Ribery's cross under pressure from Oleg Gusev.

At the time of Khacheridi's dismissal, France were 2-0 up after a pulsating opening period but any chance that Ukraine had of altering the flow of the match then drained away.

His red card was certainly avoidable after receiving a first yellow card for shoving Liverpool defender Sakho before half-time and he thoughtlessly fouled Ribery two minutes into the second half.

France coach Didier Deschamps asked for an "exceptional" match from his team and they replied in some style as they handed Ukraine their first defeat of 2013 and avoided becoming the first French side to miss out on the World Cup since they failed to qualify for the 1994 finals.

That mark on France's rich football history came via a final qualifier defeat by Bulgaria in November 1993 - and roared on by a partisan crowd at the Stade de France, the 1998 World Cup winners were determined not to suffer the same fate.

Marseille's Mathieu Valbuena and Bayern Munich's Ribery were a menace throughout, conjuring a variety of deadly set-plays, quick combinations and strong running.

And they were involved in several exchanges as Valbuena, Juventus midfielder Paul Pogba and Real Madrid's Benzema all went close to opening the scoring in the first 20 minutes.

It was in stark contrast to an insipid first-leg display in Ukraine, who this time struggled to begin with but looked to be finding their feet when the hosts went ahead.

Ukraine managed to clear Valbuena's free-kick and although Andriy Pyatov made a superb save to stop Ribery's fierce shot, Sakho was on hand to crash the ball in.

Deschamps' side then continued their first-half onslaught as Pogba fired over but they were fortunate to grab their second goal after 34 minutes, although they will feel that justice was served after Benzema was previously ruled offside for a goal when he appeared to be level with the Ukraine defence.

The Real Madrid forward had his first effort disallowed after tucking in Ribery's cross on the half-hour mark. Then four minutes later, Cabaye's shot through a congested penalty area struck Valbuena before falling for Benzema, and despite being offside by two yards, the goal stood.

However, their task became more difficult after the break when Khacheridi received two yellow cards in the space of two minutes either side of the interval.

Benzema wasted a great chance to put France ahead as he fired over from 10 yards when he had time and space to shoot after more good work by Ribery.

But when Ribery crossed in from the right, Sakho directed the ball home from close range to send France to the World Cup.