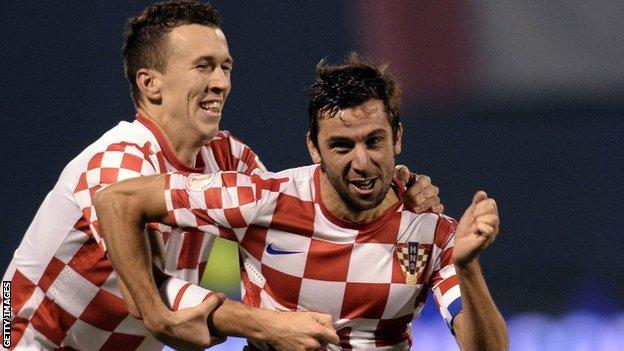 Ten-man Croatia reached the 2014 World Cup finals with a 2-0 win over Iceland in Zagreb following a goalless first leg.

Bayern Munich striker Mario Mandzukic scored first in the 27th minute - but was sent off for a challenge on Johann Gudmundsson just before half-time.

Shakhtar Donetsk's Darijo Srna secured the win with a low drive from inside the box early in the second half.

Iceland are still waiting to appear in their first major tournament finals.

The visitors had nearly stunned a hostile crowd early on when Croatia keeper Stipe Pletikosa parried a stinging Gylfi Sigurdsson shot, with Alfred Finnbogason well offside as he put the rebound into the net.

Iceland keeper Hannes Halldorsson kept out a swerving Srna free kick midway through the first half, but was powerless just before the half-hour mark when Mandzukic showed a predator's instinct to turn the ball in from close range after a deflected Ivan Rakitic cross from the left.

Mandzukic saw a stooping header turned around the post shortly afterwards but then gave Dutch referee Bjorn Kuipers no choice but to send him off after a dangerous lunging tackle on Gudmundsson.

Despite being down to 10 men, Croatia went further in front as Srna's sublime finish settled their nerves.

He rifled in a low shot as he cut in on the right flank after a darting run and pinpoint delivery by midfielder Mateo Kovacic.

"I want to thank [previous coach] Igor Stimac for steering us into the play-offs but most of all I wish to thank the players for leaving it all out there on the pitch tonight, I am very proud of them."

"Croatia was a better and more experienced opponent and showed its strength. Still, we have to be proud of what we have done in this World Cup campaign."