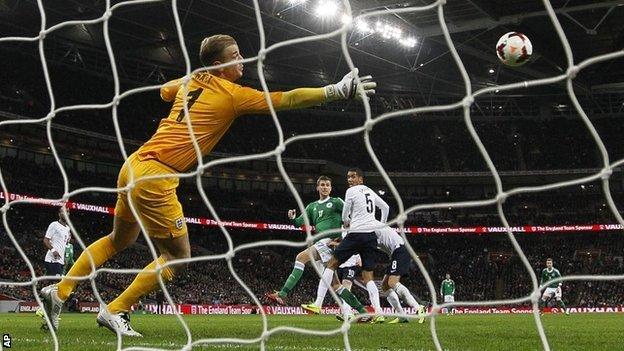 Manager Roy Hodgson once again reshuffled his team as he explores options ahead of next summer's World Cup in Brazil - but a below-strength Germany followed Chile in leaving with an away win.

England enjoyed plenty of possession but the closest they came to drawing level was when Andros Townsend's long-range effort struck the woodwork after the break.

The major bonus for Hodgson in this latest loss was the performance of goalkeeper Joe Hart, recalled after Celtic's Fraser Forster made his debut against Chile and currently out of Manchester City's side after being replaced by Costel Pantilimon.

Hart was England's outstanding performer, saving superbly from Mertesacker before his goal and from Marco Reus and Mario Gotze in the second half.

How did Hart do?

It was a night when Hart repaid Hodgson's public faith in him and confirmed his status as England's undisputed number one. It could also prove to be a turning point for the keeper as he tries to regain confidence lost over a long spell of indifferent form.

Few others on Hodgson's England undercard made compelling claims to move to the forefront of his thoughts for Brazil as the final whistle was greeted by boos from the Wembley crowd for the second time in a matter of days.

And while Hodgson will, understandably, regard this game as another fact-finding exercise rather than one where victory was essential, it was still a sobering night as England barely troubled Germany keeper Roman Weidenfeller.

England have one game left, the Wembley friendly with Denmark in March, before Hodgson names his squad for Brazil.

They enjoyed plenty of possession in a tight first half - but the contributions that mattered came late in the half and came from Germany.

Hart had been given a quiet England reintroduction but reacted brilliantly six minutes before the interval to save Mertesacker's header only for the Arsenal defender to make no mistake with an identical chance moments later, rising between Wayne Rooney and Chris Smalling to score.

And Hart distinguished himself once more just after the break when sleight of foot from Gotze set up Reus but the keeper was alert once more to make an important block.

England hit the post against Germany but failed to have a shot on target in a home game for the first time since losing 1-0 to Scotland in the second leg of their Euro 2000 play-off in November 1999. Source: Opta

Hodgson, as expected made changes, with Kieran Gibbs replacing Ashley Cole and Jordan Henderson coming on for captain and Liverpool team-mate Steven Gerrard to freshen up England's performance.

Germany were still dangerous on the counter but England came closest just before the hour when Townsend, as he likes to do, cut in from the right and hit a low left-foot shot that beat Weidenfeller but struck the post.

Hart was in action once more to save from Gotze, although he had one anxious moment when he collided with the hesitant Smalling.

Hodgson introduced Jack Wilshere, Ross Barkley and Rickie Lambert as England chased an equaliser but Germany survived in comfort and England were condemned to defeat once more.