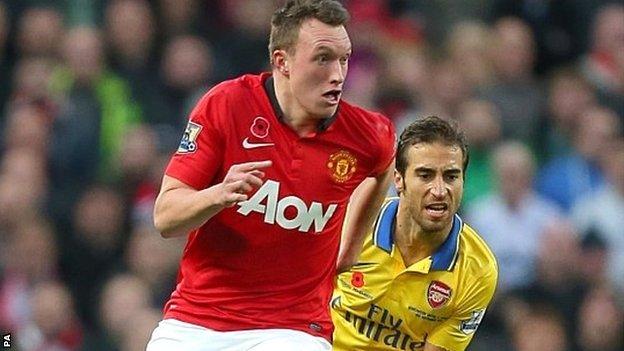 Manchester United defender Phil Jones claims critics have been desperate for the team to fail after a poor start.

But Sunday's 1-0 defeat of leaders Arsenal moves them only five points behind the Gunners in fifth place.

"People want us to fail because we have won the league so many times - everyone hates the best clubs," said England international Jones, 21.

"It is as simple as that, and United won the league long before I was here.

"We enjoy that. We relish the test we get thrown at us every week."

Robin van Persie's goal against his former team at Old Trafford on Sunday extended United's unbeaten run in all competitions to nine games, and was their third consecutive victory in the league.

But before that recent run, United - led by former Everton boss Moyes, who replaced Sir Alex Ferguson in the summer - had collected only 11 points from their first eight games, their worst start in 24 years.

Former Blackburn player Jones believes United have shown they can respond to the criticism they received then and can go on to repeat their tradition of finishing the season strongly - as they did last term to win a 20th top-flight title.

"It proves when people doubt us we are more than capable of standing up for ourselves and proving to people that is why we were champions last season," Jones said.

"We weren't champions for nothing. We thoroughly deserved all the points we got last season."