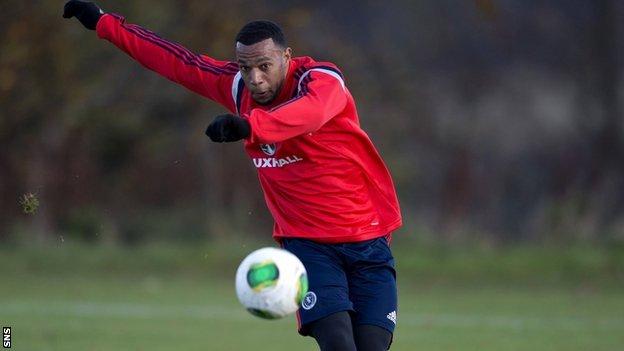 Queens Park Rangers winger Matt Phillips has withdrawn from the Scotland squad ahead of Friday's friendly against USA at Hampden Park.

Leeds forward Ross McCormack was called up on Thursday following the withdrawal of Blackburn's Jordan Rhodes, who picked up an ankle strain in training.

Experienced captain Clint Dempsey has been ruled out for the visitors after straining a calf in training.

Steven Fletcher adds class to the training. If he adds that class to the actual games, which I'm sure he will, then we're very happy

The 30-year-old had been hoping to impress after being linked with a return to English football on loan from Seattle Sounders, with Aston Villa, Everton, Tottenham Hotspur and former club Fulham all linked with the midfielder.

USA coach Jurgen Klinsmann, whose side also play Austria in Vienna on Tuesday, said: "It is a big bummer for us. He is the leader in our group.

"What he has done in the last couple of years for us has been priceless.

"To see him limping off was a real shock to us because he was really hungry for the two friendlies."

Scotland manager Gordon Strachan says he is "waiting on" Watford wide man Ikechi Anya and Derby County midfielder Craig Bryson, neither of whom trained on Thursday.

Earlier this week, wingers Gary Mackay-Steven and Craig Conway were drafted into Gordon Strachan's squad because of the absence of Celtic's Forrest and Birmingham City's Burke through injury, while West Brom's Morrison withdrew for personal reasons.

Dundee United's Mackay-Steven has previously been in senior squads, while Conway, who is on loan at Brighton from Cardiff City, has five caps.

Strachan was disappointed to lose Phillips having planned to hand the 22-year-old a third cap after he was recalled along with Sunderland striker Steven Fletcher and Ipswich Town defender Christophe Berra.

"He's had strange injuries, like a broken arm, elbow, in the last year, but I've seen him recently and he's got a determination about him," said Strachan.

"He wants to do things on the pitch and make things happen, so I liked that and I was hoping to get him in here and try him in a certain position, but it's not happened because he felt a bit of tightness after the game on Saturday and he felt it in training and it's grown into a hamstring strain.

"Hopefully we got it early enough that he is fit for the next game, but he's certainly not fit enough for this one."

McCormack had been left out the original squad by Strachan as he wanted to see Phillips in international action, but the 27-year-old Leeds striker is back in days after netting all four of his side's goals in Saturday's win over Charlton Athletic.

"Ross is excited to be back in the squad," Strachan said of the player who has scored twice in nine Scotland appearances.

"I spoke to his manager this morning and they're very pleased with him and Ross must be really pleased.

"He's just had a wee change of positional play at Leeds, which Brian McDermott thinks has helped him score more goals and we'll take that on board as well.

"If I knew he was going to score four goals, he wouldn't have been left out, but that's hindsight and that's the way Ross has reacted and that's terrific."

However, McCormack faces a battle with fit-again Fletcher for a starting place.

Strachan of the Sunderland forward: "He looks excited. He looks happy.

"He adds class to the training. If he adds that class to the actual games, which I'm sure he will, then we're very happy.

"Any team he has played with, he's added to them to make them better and I'm sure he'll do the same with us."

It is the second squad in a row from which Rhodes has withdrawn.

"Jordan Rhodes is unfortunate to go over on his ankle when there's no-one near him," explained Strachan. "He's had two strange injuries when he's been here.

"He's broke his hand and he's went over on his ankle again. He stopped training right away and we've sent him back and that's a pity."

Wigan Athletic's Shaun Maloney is also missing through injury, while fellow midfielder and national team captain Darren Fletcher continues his absence having just returned to action with Manchester United after a long battle against illness.