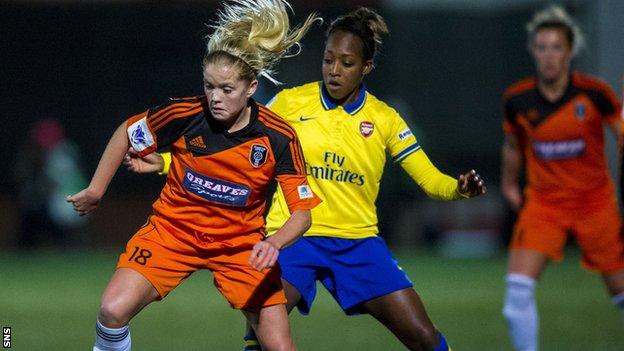 Arsenal reached the Champions League quarter-finals for the 12th successive season as a 3-2 win at Glasgow City sealed a 6-2 aggregate victory.

City captain Rachel Corsie bundled in a header but Alex Scott fired in a stoppage-time goal for the visitors.

Glasgow City, who trailed 3-0 after Sunday's first leg, were making their second appearance at this stage of the tournament and their performance marked a huge improvement on a 17-0 aggregate loss to Potsdam in 2011.

Tennis coach Judy Murray was among the 1,300 spectators at a sold-out Petershill Park and home fans were given an early lift when Lappin raced to the front post to divert home a firmly driven corner from player-of-the-match Jess Fishlock.

Arsenal's superior speed of passing was causing the home side problems and the game was level when Yankey's drive from 25 yards sailed beyond goalkeeper Lee Alexander.

With Fishlock driving City forward from central midfield, Denise O'Sullivan had a shot saved and Sarah Crilly tugged an effort wide before the interval.

Glasgow's determined mood continued throughout the second half but Arsenal fashioned the better chances, with Alexander tipping a shot from Ellen White onto the post and Julie Nelson needed to make a goal-line block from the resulting corner.

Danielle Carter then blazed an effort wide before Nobbs was quickest to react to a loose ball in the penalty area and calmly rolled the ball into the bottom corner of the net.

The home side responded with a period of sustained pressure and Corsie got on the end of another excellent Fishlock delivery to re-establish parity.

Glasgow went in search of a winner as Christie Murray skewed a shot off-target and Lisa Robertson dragged the ball wide before she forced a good save from Byrne with a rising strike.

Arsenal were on the ropes but sprung a swift counter-attack in the final minute as Kim Little broke down the left and centred for Scott to complete the scoring.

"We had a lot to prove to ourselves and everyone who came along to watch that we could compete at this level.

"After the weekend, it was really important we put in a good performance.

"I think it's hugely promising for where this club can go in the future."

Arsenal midfielder Kim Little: "It was a hard match. We knew it would be a lot different because of the size of the pitch and the (artificial) surface.

"I was a bit surprised at the way Glasgow played in the first leg but they came out tonight and went for it.

"We've won two of the three trophies and we've progressed again to the quarter finals, so when you look at it overall it has been a good season.